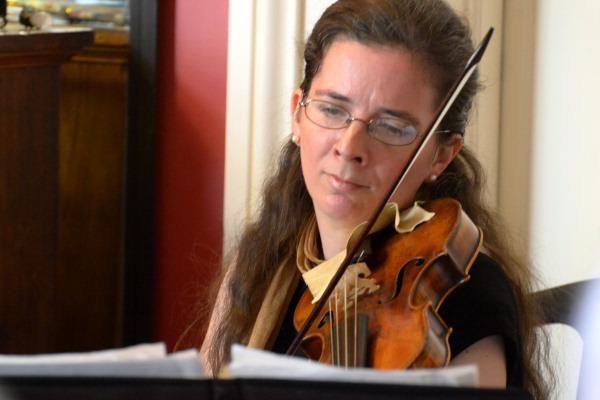 By Anthony Stoeckert, Staff Writer
Each year, the Dryden Ensemble includes a work by Bach in its season of baroque music concerts, and there’s always a bit of sadness when that concert is over, and the group realizes it won’t play Bach again for another year.
That’s not the case this season, as Dryden’s entire 2013-14 lineup is devoted to Bach.
”We’ve almost always done a Bach concert in January, and there’s always a letdown afterward, thinking, Oh we have to wait another wait another year ‘til Bach again,” says Jane McKinely, a member of the Dryden Ensemble.
The season will begin this weekend with a program titled “Bach and the Italians,” to be performed Nov. 16 at Trinity Episcopal Church, 6587 Upper York Road in Solebury, Pa., and Miller Chapel on the Princeton Theological Seminary campus, 64 Mercer St.
The Bach format doesn’t mean the season will feature works by the German composer exclusively. The ensemble’s first concert will highlight works by Bach and by composers he admired: Frescobaldi, Legrenzi, Vivaldi and Marcello.
”All the Italian music is by composers that Bach admired and studied,” Ms. McKinley says. “He had so many musical manuscripts in his library, of composers from France, Germany, Italy, England. And so I chose composers from the Italian group in his library, and decided to base it around the concerto form to some degree.”
The Bach pieces at the first concert will be concertos — the violin concerto in A minor, and an oboe concerto in A major.
”That’s where the Italian influence really comes in the most, through the concerto form,” Ms. McKinley says, adding that Bach transcribed concertos by Vivaldi and Marcello and others for keyboard.
The season will continue Feb. 1 (at Trinity Episcopal) and Feb. 2, 2014 (at Miller Chapel) with a “Bach Cantata Fest.” The concert will offer Bach’s cantatas 33 and 97, along with selected arias. The concert will honor the 100th birthday of William Scheide, a Bach devotee, and major patron of the Dryden Ensemble.
Another big birthday will be celebrated March 22 (at Miller Chapel), and April 21, 2014 (at Trinity Episcopal) as Dryden celebrates Bach’s 329th birthday with works by Buxtehude, Bach’s son, C.P.E. and Johann Sebastian himself.
Bach was an admirer of other composers, studying manuscripts that covered a wide range of geography and music history. He never traveled outside Germany, but he was still influenced by other styles, including French and Italian.
”The March concert is a Bach birthday program, which isn’t all Bach, but also composers he admired,” Ms. McKinley says.
The Dryden Ensemble was founded in 1994. The core group of musicians consists of oboes, strings and keyboards, with some of the members playing together for more than 25 years.
”Depending on the repertoire, we’ll add people,” Ms. McKinley says. “For the Bach cantata program, we’re adding four singers and more instrumentalists because we need to cover all the parts.”
The lineup for the opening concert will offer three violins, viola, cello, double bass, oboe and harpsichord.
”It fluctuates a bit but I would say the core people — violin, cello, harpsichord and oboe — stay the same. It really is, in many senses, a real ensemble in that we’ve been working together so long.”
With so much wonderful Bach music out there, deciding what pieces to include was a challenge. Ms. McKinley says violinist Vita Wallace chose what violin pieces to perform, and the program evolved.
Ms. McKinley says the season offers a nice amount of variety, and covers three of Bach’s major musical formats: concertos for the November concert; cantatas in February, and intimate chamber music in March.
Tickets cost $25, $10 students, and can be purchased at the door, or at drydenensemble.org