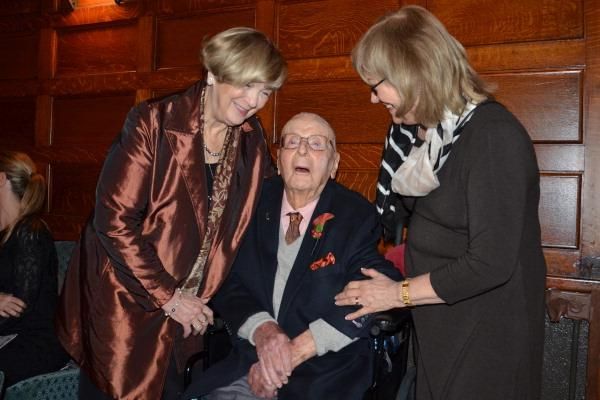 By Philip Sean Curran, Staff Writer
The classical music concert Saturday night at Richardson Auditorium brought together a lot of what William H. Scheide has devoted most of his 100 years of life to.
There was the work of Bach, whose music Mr. Scheide studied and shared as music director of the Bach Aria Group. There was his favorite conductor Mark Laycock leading the Vienna Chamber Orchestra and the Westminster Symphonic Choir, the choir from the local choir college that he helped guide as a board member for nearly 30 years. And then there were the people, 750 of them who came to the performing arts hall on the campus of Mr. Scheide’s alma mater, Princeton University, for a concert called “Ode to Joy” to mark Mr. Scheide’s 100th birthday.
”We’re now celebrating a century of joy,” said Mr. Scheide’s wife, Judy, from the stage of Richardson. “Tonight is a night of joy.”
This was the seventh in a series of birthday concerts for Mr. Scheide, who turned triple digits on Jan.6. As with each concert, a selected beneficiary receives proceeds from the night.
This year, the choice was the Westminster Choir College, a school that Mr. Scheide has a connection to. He was a board member for 27 years; nine of which he served as chairman.
”His top goal was making sure that Westminster would succeed and would continue on for many years,” Mrs. Scheide said. “It’s a very important school. And I think they have something to teach us, that how to work together in harmony for the service of others.”
Robert L. Annis, dean and director of the school, spoke during the intermission from the stage, flanked by 10 students.
”We stand here tonight, though, due to the dedication, commitment and support Bill Scheide has given to Westminster Choir College,” he said. “The essence of Westminster is at Bill’s heart.”
Mr. Annis said Betty Wold Johnson, the philanthropist, gave Westminster a matching challenge grant in connection with the concert and to honor Mr. Scheide, her friend. He said that as of last Friday, the concert had raised $500,000 for the school. The money, he said, will go toward the renovation of an academic-rehearsal space at the school’s Princeton campus.
Mr. Laycock, formerly of the Princeton Symphony Orchestra, is a family friend of the Scheides. Mrs. Scheide, addressing the audience during the intermission, recalled a conversation they all had that led to the music choice and the selection of Westminster as the beneficiary.
She said that with her husband’s birthday approaching, Mr. Laycock was visiting the Scheides over the summer. He remarked that Mr. Scheide almost completing 100 years is an “ode to joy.” People, she said, suggested that he perform that.
He adopted that suggestion and added that the performance had to include the Westminster Symphonic Choir. In turn, that led Mrs. Scheide to suggest the Choir College be the beneficiary, something Mr. Scheide agreed to.
The music for the night included a Bach chorale from Cantata BWV 140, Brahms’ “Academic Festival Overture, Op.80” and a piano prelude for four hands that Mr. Scheide wrote as a college senior for his music class at Princeton. The piece had never been performed in public. Pianists Mariam Nazarian and West Windsor native Andrew Sun did the honors in tribute to the birthday boy.
Appropriate enough for a concert named “Ode to Joy,” the evening ended with Beethoven’s Symphony No. 9.
Despite snow earlier in the day, the crowds filled in for what was advertised as a sold-out concert. Mrs. Scheide remarked how some people were calling a few hours beforehand to find out if it was going to be cancelled.
”And I said, ‘I grew up in Minnesota,’” she said.
Mr. Scheide’s family fortune was made through Standard Oil, the company that his grandfather and father both worked for. Mr. Scheide gave most of his life to classical music, philanthropy and collecting rare books.
The Scheide library, now housed at Princeton University, holds rare books including editions of the first four printed Bibles. His philanthropy has stretched near and far. In the 1950s, he helped support the legal effort in the historic Brown vs. board of education case.
”He has had a string of important charitable work that goes back… close to a century. Since he was a kid, he has been engaged in charitable activities,” said U.S. Rep. Rush D. Holt (D-12) before the concert.
Last year’s concert raised money for Princeton’s Community Park Pool. “We’re forever grateful,” said Princeton recreation director Ben Stentz said Saturday.
Other recipients of past concerts were on hand Saturday, including representatives from Centurion Ministries, which help free the falsely imprisoned.
Dallas resident Richard Miles, waiting for the concert to start, said he spent 15 years in prison, only to be set free in 2009. Now 38, he was grateful for Mr. Scheide and came all the way from Texas to show his gratitude.
”If it wasn’t for people like Mr. Scheide,” he said, “I would be still incarcerated.”