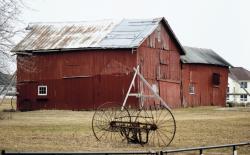 Restoration of the barn will be funded by a $1 million grant from Middlesex County.

“The barn is a testament to those who built the structure so long ago,” said John Katerba, chair of the Monroe Township Historic Preservation Commission. “That building survived not only hurricanes, but all storms between now and the 1830s, when it is estimated the building was built. And it’s still standing today.”

The Monroe Township Council voted to authorize Feist Engineering to begin work on the plans at the March 3 meeting.

According to Katerba, the Middlesex County Board of Chosen Freeholders awarded the $1 million grant several years ago from the county open space fund, which can be used for historical preservation.

“We put together a set of plans and specifics for restoration work about a year and a half ago, but the bids came back too high and we had to scale back the project,” he said.

According to Katerba, the barn will be restored using the original construction methods.

“The barn is made of very large timbers all put together with wooden pegs,” he said. “What’s going to happen is the beams will be numbered, the barn will be dismantled, refurbished beams that need replacing will be restored and then we will have a community wide barn-raising.

“People will be able to come out and be able to see how things were put together back then. … It will be a great educational tool for the public.”

The barn will be used as an agricultural museum when its restoration is complete.

“We are planning agricultural displays and farm-equipment displays from Monroe’s rich agricultural past,” Katerba said. “We can use the barn for a large number of things.”

The $1 million grant will also fund the reassembling of one of Monroe’s one-room schoolhouses, which was used for township children through the 1930s. According to Katerba, the building was placed in storage about 10 years ago with the intent of relocating it to the historic site.

“That particular building has a lot of history here,” Katerba said. “In 1936, when the town built schools … they closed all 16 one-room schoolhouses. This particular schoolhouse was converted into our very first Town Hall.”

The 40-acre Dey Farm site was preserved more than a decade ago in an agreement that involved the developer of nearby Southfield Estates. The builder agreed to relinquish the property it purchased from Charles Dey in 1997 as a future development site. The township acquired it in 2001 and has been working on restoration efforts ever since.

The Dey Farm Historic Site currently includes the Charles Dey Home, which serves as a museum dedicated to Monroe Township history; the red barn associated with the home; and the England House, a circa-1810 home relocated to the site in 2004. The grounds are used for township-wide historical events.

When fully completed, the historic site will incorporate the schoolhouse and two additional barns — the Harvey H. Dey Barn and the Whitson/Byrne Barn.