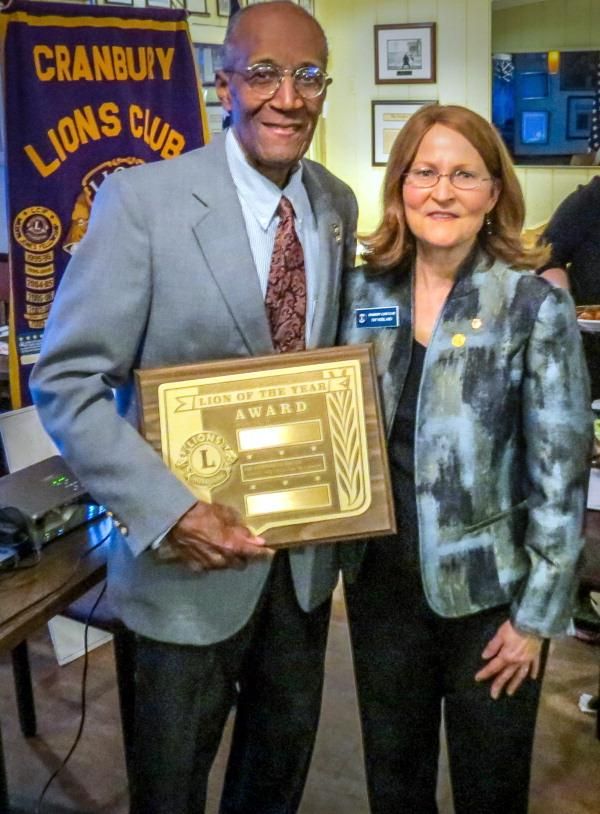 The Cranbury Lions awarded Lion Alex Johnson its 2013-2014 Lion of the Year award at its meeting on April 2.

CRANBURY — The Cranbury Lions awarded Lion Alex Johnson its 2013-2014 Lion of the Year award at its meeting on April 2.
The Lions have been awarding this award yearly since 1970, according to the organization.
Mr. Johnson joined the Lions in February of 2001 and moved up in the organization, becoming president in 2005-2006.
The Lions gave Alex the highest award that a club can bestow on a member, the Melvin Jones Fellowship award in April of 2005, according to a press release from the club.
According to the release, Mr. Johnson has consistently supported all the service projects and fundraisers that the Cranbury Lions hold each year including selling ice cream the Cranbury Day Food stand, serving milk and juice at the Pancake Breakfast, serving donuts and cider at the annual Pumpkin Carving, selling 50/50 tickets at the Lions Memorial Day Parade and helping with the Lions’ activity at the Drug Free Fair each May.
At a Lions build event at a Habitat for Humanity home in Hightstown, Alex could be seen putting on siding on the outside of the second floor of the home, freely giving his time to serve others, according to the release.
When the Lions formed the Jamesburg Leo Club at the New Jersey Training School in the spring of 2011, Mr. Johnson volunteered to serve as advisor, and regularly attends the Leo-Lion joint meetings and some of their service projects and has been a model to inspire the Leos, according to the organization.
When he is not attending a Lion activity, he can be found training for upcoming track events.
In July of 2013 he ran in two events of the National Senior Track Meet held in Ohio winning two medals. He also invited his coach, Fred Samara, who just happens to be the Princeton University Track Coach to speak at a meeting.
Around Cranbury, you will hear Mr. Johnson called “coach” because that’s how many of the young people and their families refer to him due to his years of substitute teaching and coaching track at the Cranbury School, according to the organization.
The Cranbury Lions are always looking for members of the community who would like to join the lions in serving others, according to the organization.
For more information about the Cranbury Lions or if you would like to attend one of its meetings, you can visit the www.cranbury.org or contact any Lion for more information.