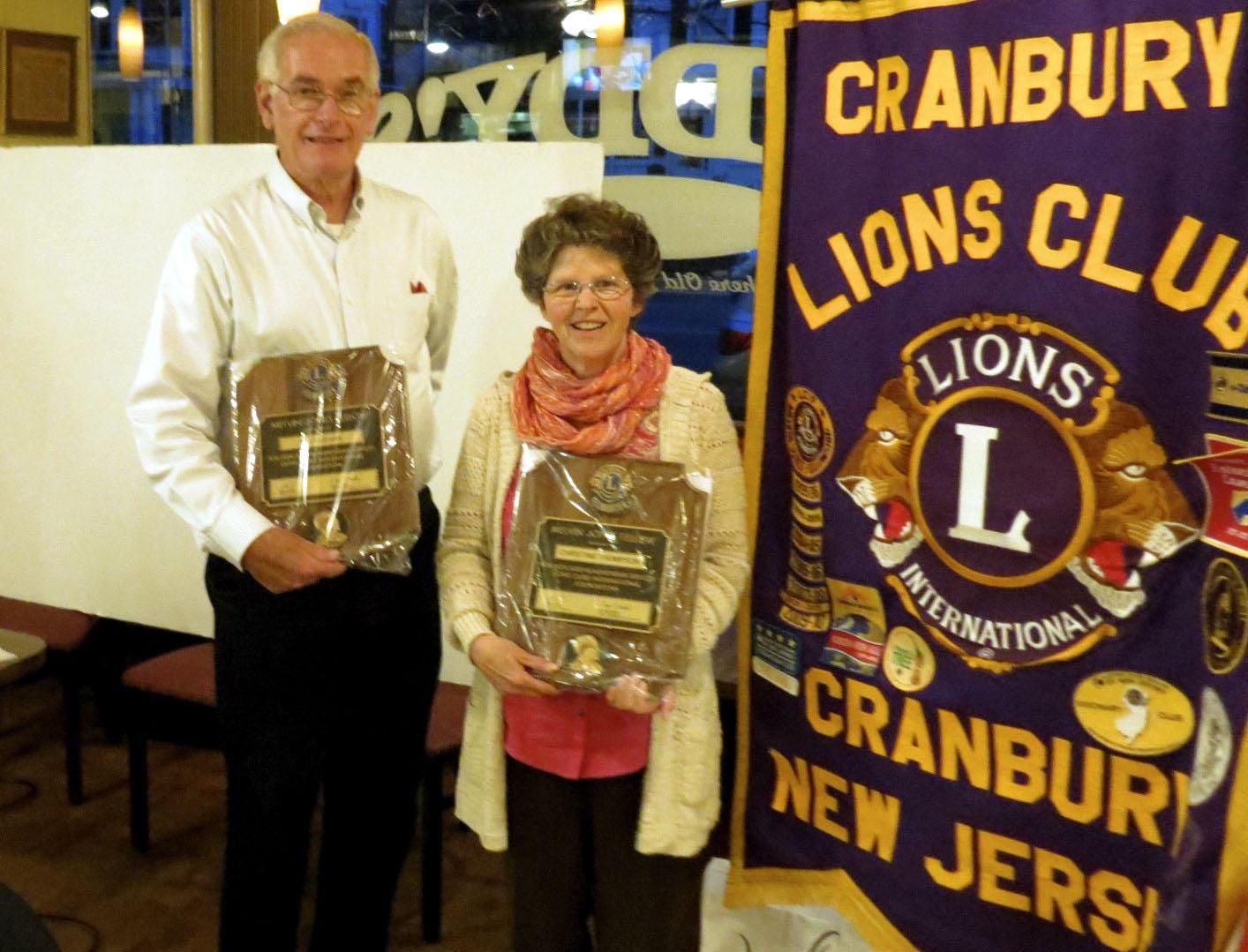 By Nicole M. Wells, Special Writer
CRANBURY — The Cranbury Lions Club recognized two of its own for their humanitarian efforts at its meeting on May 7 at Teddy’s Restaurant.
Lions Christine Thompson and Patrick Meehan were each awarded the Melvin Jones Fellowship, the highest honor a member can receive, for their involvement in community affairs.
Following in her longtime Lion father’s footsteps, Ms. Thompson joined the Cranbury Lions Club in 2002. A former club president, from July 2011 to June 2013, she currently serves as past president on the Board of Directors, according to a press release from the club.
During her time as a Lion, Ms. Thompson has been the committee chairperson for many committees, including co-chair of the annual pancake breakfast and the Golden Agers Luncheon, as well as chairperson for the spring raffle and chair of the Float Decorating Committee for the annual Memorial Day parade, according to the release.
In the wake of Superstorm Sandy, eight families in South River were personally touched by Ms. Thompson, when she matched them with grant money, as part of the club’s Sandy Relief programs, the club said.
Additionally, Ms. Thompson is the Cranbury Lioness Liaison and executes the phone tree for club members who do not have email addresses.
Cranbury Limousine Service, which Ms. Thompson owns, is also a Lions Club supporter.
A Cranbury Lion since June 2005, Mr. Meehan has held the positions of director and vice president on the Board of Directors.
As co-chair of the Cranbury Day Lions Club food stand and pancake cook for the club’s annual pancake breakfast, Mr. Meehan is always willing to serve those in the community, according to the release.
Neither Ms. Thompson or Mr. Meehan was available for comment as of press time.
The Melvin Jones Fellowship was established by the Lions Clubs International Foundation in 1973 and is named in memory of Lions Clubs International founder, according to the organization’s website.
Each fellowship is funded by a $1,000 contribution to the foundation by Lions Clubs, according to the Cranbury Lions Club.
According to the release, the foundation has awarded more than 11,300 grants, totaling more than $826 million, in 208 countries.
The LCI Foundation’s programs are in the areas of preserving sight, providing disaster relief, supporting youth and meeting humanitarian needs. The foundation helps Lions Clubs worldwide band together to help people in need, according to the release.