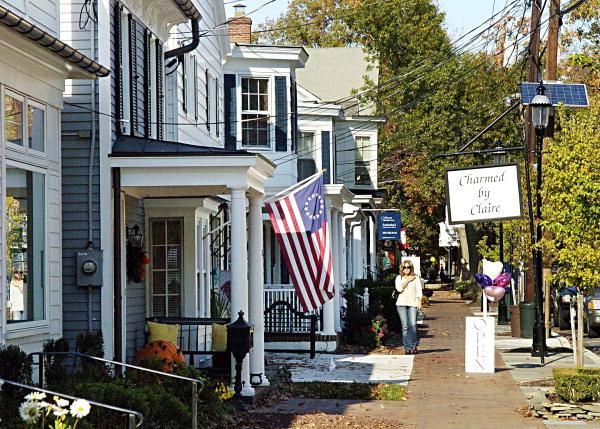 By Nicole M. Wells, Special Writer
Standing to the side of Route 130, just past Dey Road, a narrow green sign with white lettering points the way to a slight right that eases off the southbound side of the highway.
Making the turn, the NASCAR-fast pace characteristic of New Jersey driving slows, while the seemingly ceaseless barrage of highway signs gives way to a leafy canopy of mature trees, turned out in their seasonal best.
As the sky stretches from its celestial seat to meet the edge of a field at the horizon, another drop in speed, this time to a mere 25 mph, signals your arrival in the heart of Cranbury.
Driving along North Main Street, marked as much by newer development as by historic homes (and remodeled historic homes), you can’t help but feel the reverberations of the past echoing down through the years and into the present.
Neutral-toned clapboard houses, some flanked by wide, expansive porches, and hung with sparkling multi-paned windows, sit adjacent and across from one another, separated by the occasional white picket fence. Looking at them, you get the sense that the original 18th- and 19th-century owners might come around the corner at any minute.
As the downtown area comes into sight, there’s no need to fumble for your change purse or wallet, while simultaneously hunting for a parking spot. On-street parking lines both sides of the street, with nary a meter in sight.
So having parallel-parked your way into a spot — or circled round until finding one you could simply pull into — you can wander the brick-lined sidewalks at your leisure, free from the chains of two-hour parking.
If scavenging for antiques is your idea of time well spent, David Wells, proprietor of David Wells Antiques (55 N. Main St., 609-655-0085), probably has just that curiosity piece you’ve been looking for. Like stepping backward through a kaleidoscope, the shop is a knickknack collector’s heaven, with an assortment of merchandise that’s bound to have something for everyone.
"We sell a little bit of everything," Mr. Wells says, standing next to a 140-yearold dollhouse. "Some things are true antiques and then there’s things like military collectibles and cups and saucers. All kinds of things."
A former Marlboro art teacher, Mr. Wells says he has been at his Cranbury location for 19 years, having started the business before he retired from teaching. "Most of our business is gifts," he says. "We do gifts and I’m very proud to say that with our Christmas gifts, we don’t get any returns."
In addition to the uniquely eclectic mix of things he purveys, Mr. Wells said that he provides a level of service not often found in retail today: gift wrapping.
"I don’t do very much very well," he says, "but I am an excellent gift wrapper. I don’t care if it’s (worth) $5 or 500, that gift’s going to look like 500."
Using various papers and ribbons, Mr. Wells says he tries to make each gift that he wraps as special as possible.
He says he will even gift wrap items not purchased at his store, as long as a donation is made to an animal charity.
Now in its seventh season, Gil & Bert’s Ice Cream (69 N. Main St., www.gilandbertsicecream. com; 609-203-6931) is warming to a new idea. Instead of shuttering the window during the colder months and re-opening in April, owner Christine Ondocin says that this year she’s going to be offering a little respite from the chill of winter.
"I’m going to open up and sell hotdogsfrom January through March," she says. "We’re also going to have hot chocolate with vanilla or chocolate ice cream in it."
Gil & Bert’s will be offering a selection of hot dogs to appeal to different tastes, Ms. Ondocin says, with vegan and beef hot dogs and bratwurst on the menu. "We’re going to give it a try," she says. "Everybody seems very receptive to it." So expect the spot to re-open in January for its inaugural winter run.
A block or two down the street, Charmed by Claire (33 N. Main St., charmedbyclaire.net"www. charmedbyclaire.netwww.cranburybookworm.comwww.consignattwiceisnice.comknappscyclery.com"www. knappscyclery.comwww.thecranburyinn.comwww.studio43hairdesign.comteddyscranbury.com"www. teddyscranbury.com