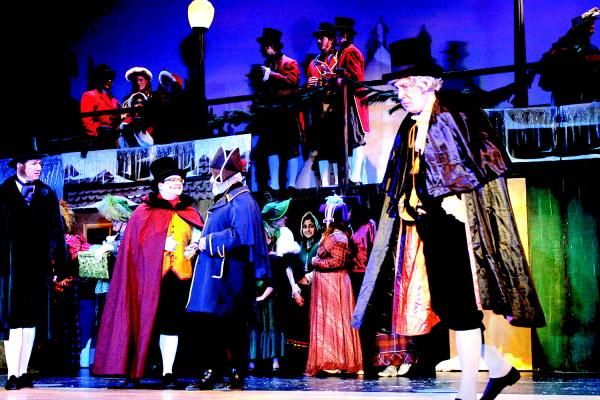 "A Christmas Carol" and "A Charlie Brown Christmas" coming next weekend, Dec. 19-21

The Downtown Performing Arts Center of Lambertville will ring in the holiday season with two productions: "A Christmas Carol" and "A Charlie Brown Christmas."
Both shows, set to run during the weekend of Friday, Dec. 19, Saturday, Dec. 20 and Sunday, Dec. 21, will be performed at the South Hunterdon Regional High School theater at 301 Mount Airy-Harbourton Road, West Amwell.
"A Christmas Carol" features several actors who return to perform in this annual production. Lambertville resident David Whiteman reprises the role of Ebenezer Scrooge, a part he first played in 2010.
He has performed extensively on Pennsylvania and New Jersey stages and appeared this past summer in numerous productions at the Washington Crossing Open Air Theatre.
Louis Palena again will play Bob Cratchit. He has entertained audiences on both sides of the Delaware River for almost two decades and is the artistic director for the Washington Crossing Open Air Theatre.
Jenny Johnson, also of Lambertville, returns to portray Mrs. Fezziwig.
The cast is rounded out by Jill Palena, Jay Casale, Damian Bartolacci and many of the performers from the Washington Crossing Open Air Theatre.
"A Christmas Carol" will be performed on Dec. 19 at 7:30 p.m., Dec. 20 at 3 and 7:30 p.m. and Dec. 21 at 3 p.m.
Tickets are $18 for adults and $13 for children (12 and under) and seniors.
"A Charlie Brown Christmas" will be performed Dec. 20 at 11 a.m. and 1 p.m. Tickets are $6 for children and adults.
Based on the holiday television special and featuring Charlie Brown, Snoopy, Lucy, Linus and the rest of the Peanuts gang, "A Charlie Brown Christmas" touches on the commercialization of Christmas and serves to remind audiences of the true meaning of the season.
Tickets for "A Christmas Carol" may be purchased in advance online at www.downtownpac.com. Tickets for both productions will be available at the door prior to each performance.