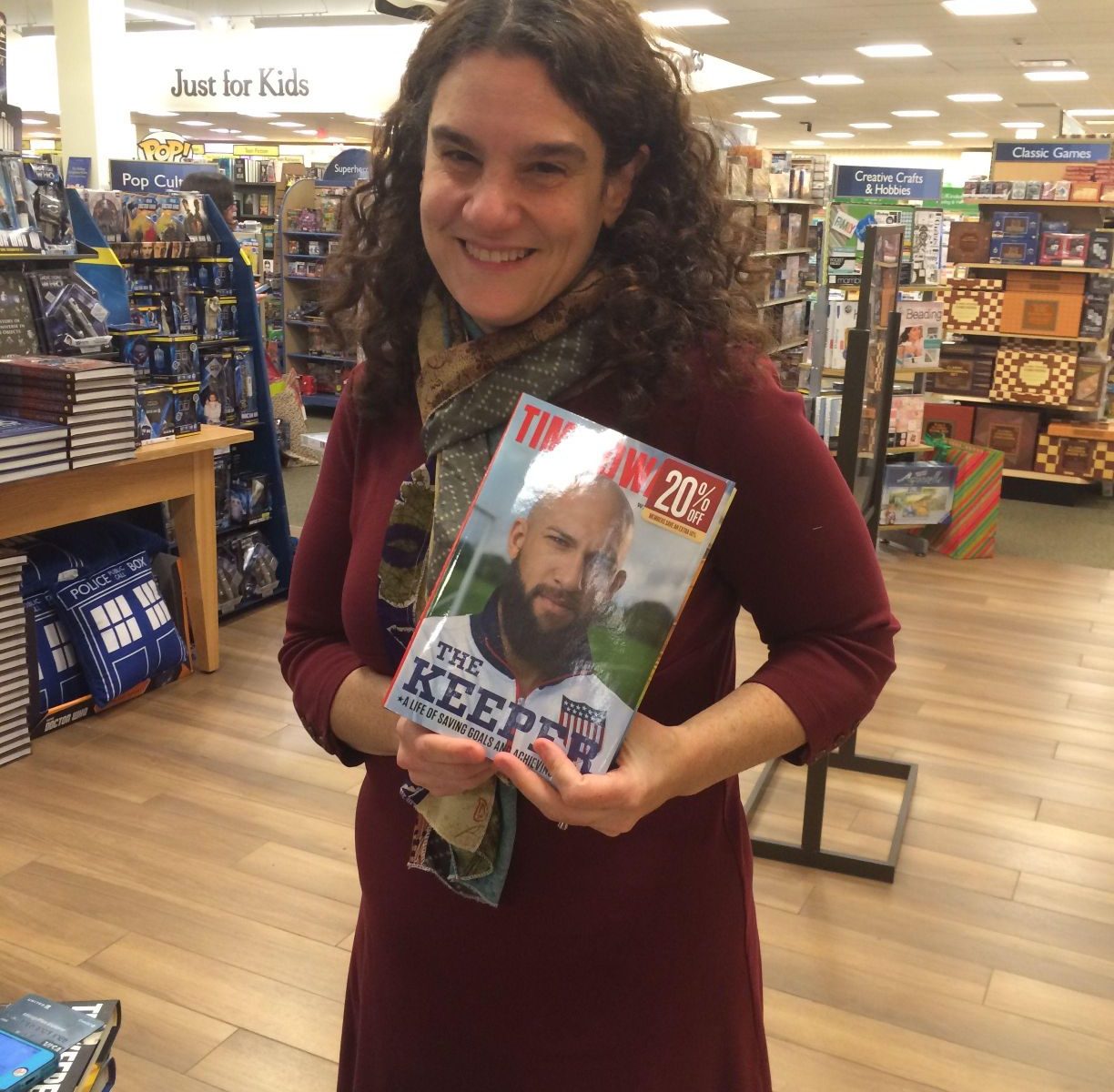 By Pam Hersh
I was scheduled to do some wrapping, but ended up rapping. The result was an extraordinarily uplifting conversation with Plainsboro resident Leslie Kowalski.
It all came about because I was too cowardly to tell the director of the Plainsboro Public Library, about the one job in my life that made me cry from frustration and failure. As a gift wrapper for Steinbach’s department store in Asbury Park 55 years ago, I elicited the wrath of my supervisor who — while wearing a Santa hat — fired me after my first day on the job.
Plainsboro Library Director Carol Quick, unaware of my wrapping trauma, asked me to be a volunteer gift-wrapper at Barnes & Noble at MarketFair, as part of a fundraising initiative for the library. The bookstore gave a portion of the night’s proceeds to the library — whose volunteers in turn did the gift-wrapping. So I put a gift box lid on my intense feelings of inadequacy and agreed to the wrap challenge.
The good-luck wrapping angel was with me the night of Dec. 10 because very few people wanted their purchases covered with paper. People were too rushed, distracted, undecided, or preferred recyclable gift bags (my personal favorite). I was in the process of stifling a big yawn of relieved boredom, when suddenly appearing before me was a woman with her arms overflowing with five or six copies of the same book.
”We are in it… we are in the book… I can’t believe it… here we are… right here… in this picture…,” she gushed in a state of high emotion to the library director who knew her from Plainsboro library activities.
The woman was Leslie Kowalski. I am unsure whether anyone actually wrapped her books, because we all got so engrossed in the rap. The book, “The Keeper: The Unguarded Story of Tim Howard,” is the autobiographical story written by Tim Howard, the superstar soccer goalkeeper, who plays for the English club Everton and the United States National Team.
A North Brunswick native, Tim Howard entered Leslie’s world, because he has Tourette syndrome, the neurological disorder characterized by involuntary tics and vocalizations. Leslie’s two daughters have Tourette’s, and her family took a “magical, amazing” trip to the United Kingdom to meet with Mr. Howard and his mother. Three years ago, the Kowalski family (Leslie, daughters Paige and Tess and husband Tim) bought the winning raffle ticket for the “Team Up with Tim Howard” trip, which was the grand prize in a raffle fundraiser for the New Jersey Center for Tourette Syndrome.
According to Leslie, Mr. Howard in his book describes “what it feels like to have tics, sensory issues and compulsions — something that so few people understand… (He also) conveys his own evolution as a Tourette syndrome advocate and how that advocacy is central to his work it grounds him… Tim’s advocacy started with contacting… Faith Rice, the director of the NJCTS, many years ago, and it has continued through the development of the… Tim Howard Academy to support, encourage, kids with TS.”
Leslie defined the inspirational trip as a confidence-building milestone in the lives of her daughters, Tess, 15, and Paige, 11, and as a motivational milestone in the advocacy efforts of the entire family.
Since the trip, Tess, who is home schooled, has evolved into a compelling and polished spokesperson for the TS cause. She has spoken in front of many school and youth groups totaling around 800 students in New Jersey. In addition, she has trained to deliver Patient Centered Medical Education talks, at many hospitals and medical schools, most notably to more than 100 doctors at Yale Medical School. Her younger sister Paige, who started public school in the middle of fourth grade and now attends the Grover Middle School is taking a class in public speaking in order to prepare to follow in the family tradition of advocacy. But her main takeaway from her meeting Tim Howard was to become an enthusiastic soccer player in the West Windsor Plainsboro Soccer Association.
he final touch on my rap with Leslie concerned a wrap for the body. As a way of thanking Tim for the time he spent with her family, Leslie made him a scarf. “I love to knit and after meeting him, my family came upon a quaint British yarn shop with lovely, soft wool. I knew in that moment what I could do to thank him for his visit… He was warm and engaging, easy to talk to, full of respect for anyone he deals with, and particularly friendly and encouraging with Tess and Paige. It was also sweet to watch his relationship with his mom Esther — warm, funny and very, very connected. He is a grounded thoughtful person with a great mom to thank for it… Even though he is a very busy man, he treated us as if he had all the time in the world,” she said.
What a perfect way to wrap up the holiday season and go forward to the New Year.