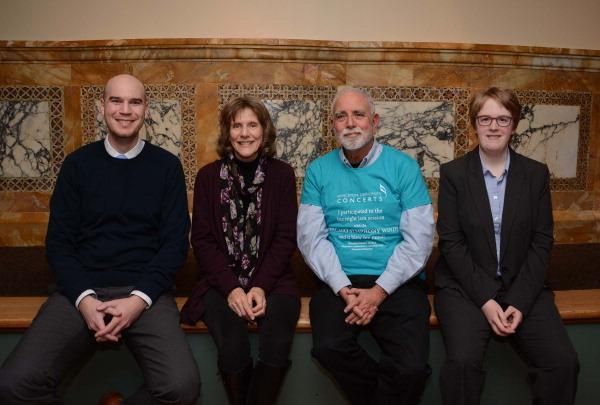 By Philip Sean Curran
It is around 8:30 p.m. on a recent Thursday, the intermission of a concert the Chicago Symphony Winds is giving at Richardson Auditorium on the Princeton University campus.
Later in the evening, Michael Perlin of Trenton will take the stage with nearly 50 other amateur musicians for an after-concert with the professionals to perform Mozart’s Wind Serenade in E-flat Major. He has not played in public in some 15 years.
”I think it’s really cool. I’m excited,” said Mr. Perlin, a retired law professor, whose wife is in the audience. “I’m kind of puzzled that I’m not nervous. Maybe I should be, but I’m feeling good about it.”
For the past few years, Princeton University Concerts has given amateur musicians the opportunity to play with the pros, something called the “late-night chamber jam.” Think of it like Roger Federer calling down a few fans from the stands at the U.S. Open to play doubles.
”It’s really wonderful to see… all the ages and all the abilities on stage together just celebrating their love of music,” said Marna Seltzer, director of Princeton University Concerts. “All different kinds of people love music, and it’s something that people share in common.”
Ms. Seltzer introduced the late-night jam to Princeton; she knew that a fair number of amateur musicians come to watch performances at Richardson. So bringing the audience and performers together was a natural.
As director, she chooses the programming for each season. She said she considers what musicians “that we hire to play in the concert might make sense to be a part of this experience.”
”It’s a really a generous thing for them to do, to take their time after they have played a very, very demanding program to take another hour on top of a long evening… and play with the amateurs,” she said.
The amateurs on this night ran the age gamut, from an 11-year-old girl to a man in his 80s. Lindsay Hanson, the artists service manager at Richardson, is a horn player in her free time. She studied music in college and performs regularly. When she saw the Chicago Symphony Winds on the performance calendar, she got excited.
”I’m very excited to be performing on the stage where I work, because that’s an opportunity that I don’t get very often,” she said. “To join in with people who maybe haven’t set foot on stage in several years or even on this stage at all is just really exciting.”
Mr. Perlin retired recently from New York Law School, whose graduations always are at Lincoln Center. As a faculty member, he would be on the stage and think to himself how great it would be able to play there.
Aside from the experience of playing in a venue like Richardson, the amateurs had the performance conducted by Michael Pratt, the conductor of the university orchestra.
Ms. Seltzer says she thinks the professionals get more out of it than the amateurs.
”For them, this is the future of their field,” she said. “The better the field’s going to be if they have more people engaged in music.”
Ms. Seltzer uses an array of networks to find amateur musicians interested in performing, like private music teachers, youth orchestras and amateur groups. “But it’s a real grass-roots effort,” she says.
In the past three chamber jams, the performances were all for string players; last week was the first for wind players. “So it was actually a great opportunity to reach a whole different set of amateurs,” Ms. Seltzer said.
Nancy Kays of Stockton, one of the other amateurs set to perform, said she was “nervous (and) excited too.”
”It’s just a wonderful, great opportunity,” she said.
Musicians did not have to audition or rehearse together before taking the stage.
”I have to say considering that you can come with no experience or with a lot of experience, it’s remarkable that every single time we’ve done it, we’ve gotten through every piece without stopping,” Ms. Seltzer said.
The music was sent out two weeks in advance to the players. Ms. Hanson had played the Mozart piece before and said she was familiar with it.
”I downloaded the music from online, and I’ve been trying to practice every couple of days,” Mr. Parlin said. “It’s been a long time since I’ve played regularly.”
So what’s in store for next season? Ms. Seltzer does not know yet, although she said she would like to do something jazz-oriented.