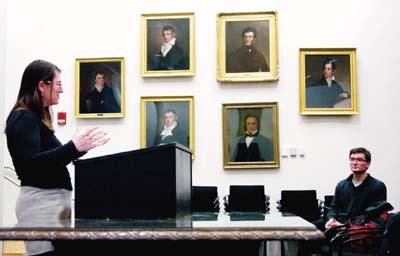 Mayor Liz Lempert said Wednesday that it is “vitally important” that the community has input on the long-range campus planning that Princeton University is embarking on.
“Obviously, the direction that the university takes on where and how it plans to expand is going to have significant effects on the town,” she told university students on campus at Whig Hall.
She believes it is important that the community be part of the planning process “so that the impacts can be acknowledged and efforts can be made to address them.”
The school hired a consulting firm last summer to work on a campus plan, a document that will give university officials options for and help them make decisions about future growth and construction. The planning will look short term, into the next 10 years, and then long term for the next 30.
In her remarks, she said there have been “historic tensions” in town-gown relations that fall into the categories of development and economics. She said that as the largest landholder in town, the university has been “the driver of growth and change.”
While the community is largely built out with a stable population, the school has evolved into one of the world’s leading research universities, she said. The school will continue to grow and build to remain competitive, she said.
“So issues around growth and development are inevitably going to cause some tensions because the university and community are on fundamentally different growth trajectories,” she said. “We’re basically a small town, and we like being a small town.”
In her remarks, the mayor said one of her goals was to improve town-gown relations. In each of the past two years, she said University President Christopher L. Eisgruber has come to meet with the Princeton Council.
Those meetings are “as important for the substance of what is being discussed as well as just the symbolism of the president of the university and the governing body gathering around a table to talk,” she said.
Mr. Eisgruber and Mayor Lempert took office the same year, 2013; his son and her oldest daughter attend Princeton High School.
Later, she said the university and the town have common interests, including public safety, public health and transportation.
She said the town is watching a lawsuit that a group of citizens filed challenging the university’s property tax exemption. The town is technically a defendant in a case that would see the municipality reap a windfall in new tax revenues if the school loses.
“The truth is we benefit if the citizens win,” she said.
Mayor Lempert’s husband, Ken Norman, is a professor at the university. As a result, she said she has to recuse herself on land use and development related matters.