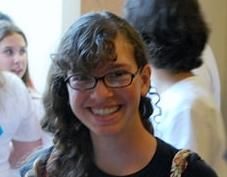 By
Hallie Hoffman, of Belle Meade, wants you to know that people with Tourette Syndrome (TS) are more than just their diagnosis.
“TS is just one group we belong to, just as people may identify themselves with other groups such as athletes or musicians,” she said, “TS is not a disorder that puts people at social odds with others, as it is sometimes portrayed in the media.”
Tourette Syndrome (TS) is a neurological disorder characterized by involuntary movements or sounds known as tics. It is often accompanied by other disorders including ADHD, anxiety, obsessive-compulsive disorder, depression and learning disabilities. As many as 1 in 100 school age children  show symptoms of TS, which means there are more than  20,000 New Jersey children living with the disorder.  Hallie is one of them, and she joins other teens as Youth Co-chairs for this year’s NJ Walks for TS at Princeton.
NJ Walks for TS is a 5K walk and family fun run at Mercer County Park on March 29th by the New Jersey Center for Tourette Syndrome (NJCTS). The event raises awareness while breaking the stigma attached to the disorder.
“Our mission is  one of acceptance and education, and we need the public’s help to accomplish this.” said Hallie.
To help is to attend the Walk (register at NJCTS.org) or donate (also through NJCTS.org). Proceeds from NJ Walks for TS will benefit the Education Outreach Programs of NJCTS, which include youth leadership development, in-services for educators and students, hospital grand rounds presentations for healthcare professionals and scholarships for students with TS.
Education is a very powerful tool in fighting the stigma attached to this disorder, and Hallie knows this well.
Her interest in learning more about TS led her to invite a speaker to her school to talk about the disorder- before she even had a diagnosis.
“Even though I knew I had TS, my parents were afraid that if I got the diagnosis, I would be bullied by my peers,” said Hallie, ” It was my interest in educating others about TS that helped me confront my parents about getting a diagnosis, and shortly after I became trained as a Youth Advocate for NJCTS.”
Youth Advocates travel to schools and hospitals to train students and healthcare professionals about TS. Last summer, Hallie was part of the first class to attend the Tim Howard NJCTS Leadership Academy at Rutgers University.
“Young people with TS are a force, they are motivated and dedicated to helping their peers living  with TS and other neurological disorders,” said NJCTS Executive Director Faith W. Rice, “NJ Walks for TS was founded for kids, by kids- and the work they are able to accomplish will help a new generation.”
Hallie is counting on the public to make this year’s event bigger than ever.
“Not only is [NJ Walks for TS] really fun, but it’s a great way to be a part of a larger goal,” she said, “A 5K may not seem that important, but the support shown and the money raised make a huge difference.”
NJ Walks for TS at  Princeton 5K
Sunday, March 29th
Registration begins at 1 p.m.
Mercer County Park- East Picnic area
1346 Edinburg Rd, Princeton Junction, NJ 08550
To register, or donate, visit www.njcts.org