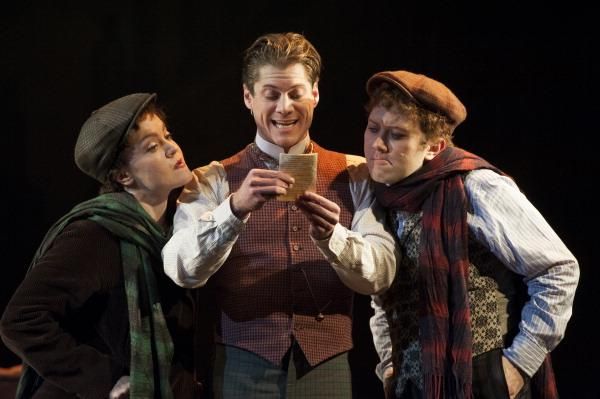 Ken Ludwig has a blast with everyone’s favorite detective

Who doesn’t love Sherlock Holmes? For that matter, who doesn’t love Ken Ludwig, America’s master farcist? (If there is such a word; if not, Mr. Ludwig deserves to own it outright.)
Mix the two, stir vigorously, and voila — we have this mashup of Arthur Conan Doyle’s most-celebrated novel, along with a madcap dash through sly pop-culture references. It’s literally tearing up the McCarter Theatre main stage through March 29.
Mr. Ludwig takes the 40-odd characters in Conan Doyle’s novel The Hound of the Baskervilles and squeezes them into a cast of merely five, who must be exhausted by the end of each night’s performance. I know that orchestra players get extra pay if they “double” on more than one instrument in a performance. I wonder — does Actors’ Equity allow a similar arrangement for performers in a play?
The fun here is not only in Mr. Ludwig’s hilarious send-up of iconic Holmesian plots, but also in the split-second timing, as actors slip in and out of roles (not to mention costumes and genders) in minutes — nay seconds — all at a breakneck clip. Think of Simon Corble and Nobby Dimon’s staging of Alfred Hitchcock’s filmThe 39 Steps with only four actors. The difference is that Mr. Ludwig takes more liberties with his source.
As in all of Conan Doyle’s Holmes novels, the narrative is through the eyes of Dr. Watson (Lucas Hall), recollecting in tranquility the events now past. The story centers on the mysterious death of Sir Charles Baskerville, heir to the Baskerville fortune. A family legend has it that an 18th-century ancestor, the lecherous Hugo Baskerville, was killed one night as he pursued a country lass across the dark moor. The killer was said to be a huge black hound.
Recently, Sir Charles’ lifeless body was likewise found on the moor, his face contorted in fear and his fingers clutching the ground. Footprints of an enormous dog were discovered nearby. To solve the case, Sir Charles’ physician, James Mortimer (Stanley Bahorek), visits Holmes (Gregory Wooddell) in his Baker Street digs.
Holmes sends trusted assistant Watson to accompany Mortimer and the recently arrived heir apparent, the Texan Sir Henry Baskerville (Michael Glenn, in dandified cowboy mode, complete with holstered six-shooter). Watson will try to track down possible suspects near Baskerville Hall, as well as identify a shrouded figure who seems to be tailing Sir Henry.
Victorian mystery novels are chock full of eccentrics — any one of whom could be the murderer. And there are plenty. There’s a Baskerville neighbor, Jack Stapleton (Mr. Bahorek again), who flits about the countryside, butterfly net in hand, chasing elusive prey. And there’s Stapleton’s, er, sister, Beryl (Jane Pfitsch), and the ghoulish Barrymores, longtime housekeepers of Baskerville Hall (Mr. Bahorek and Ms. Pfitsch). Add to that some fleeting appearances by a pair of boy gofers, two giggling women, a lisping Spanish hotel clerk, a scullery maid, and on and on. Costuming by Jess Goldstein was so convincing that it was hard to tell who was who under the wigs (by Leah J. Loukas), caps, and vests, let alone what gender the actors were. Under the adroit direction of Amanda Dehnert, these five actors are astonishingly versatile, and howlingly funny.
The only actors who portray single characters throughout are Mr. Wooddell as Holmes and Mr. Hall as Watson — both are superb. Mr. Ludwig amps up the classic Holmes-Watson relationship to enhance the humor. In the opening scene, their dissection of who might have left an elegant walking stick ends in a hilarious “I gotcha.” Mr. Wooddell plays the self-assured Holmes with a delightfully super-sillyish smugness.
At the play’s world premiere in January, Mr. Ludwig said, “Comedy is becoming too dependent on literal sets and specific costumes. It feels to me that it needs some air. My hope is that the play will speak to the raw, creative joy of being in a live theater and telling a compelling story in a wildly new way.” Wildly is the word.
Essential to the farce is the production ensemble of set design (McCarter veteran Daniel Ostling), lighting (Broadway veteran Philip S. Rosenberg), and sound design (Chicagoans Joshua Horvath and Raymond Nardelli). The action unfolds to the booming strains of Mahler. There are thunder, lightning, rainstorms, curdling beast-howls, steam engines, not to mention flora plummeting from above, and fauna scooting out from the wings. Windows, doors, rooms, and spyglasses appear out of nowhere, while persons and limbs ascend from, or descend to, points below. The stage is as pliable as the cast.
Ken Ludwig’s Baskerville is a blast and a half—more fun than anyone should be allowed to have in less than two hours. This dog will hunt.
Baskerville continues at McCarter Theatre, 91 University Place, Princeton, through March 29. For tickets and more information go to www.mccarter.org or call 609-258-2787.