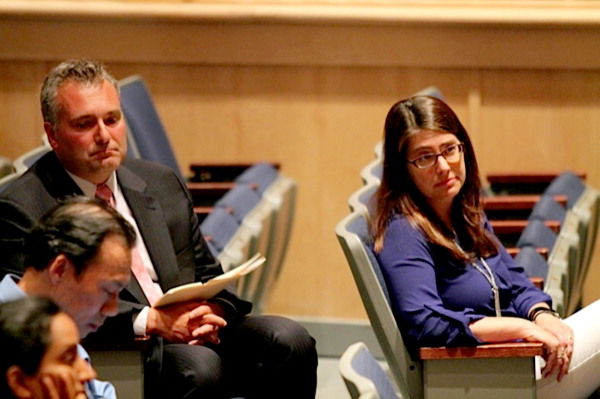 By Philip Sean Curran, Staff Writer
Police Chief Nicholas K. Sutter said Wednesday that Princeton has been targeted by a series of hoax phone threats that he described as “terrorism.”
At a community meeting, the chief briefed parents at the John Witherspoon Middle School about the “swatting” phenomenon going on state and nationwide, to the point that Princeton has experienced about 14 threats since January. Of those, six calls were made to public schools in the district; in two cases students were placed on lock down as a precaution.
He said calls are coming in pre-recorded or through what he described as computer synthesizers, through Internet-based phones that do not have traceable phone numbers. The technology is sophisticated enough to mask the caller’s identity, what he called “their digital fingerprints.”
Police have to respond to the threats as if they are real, unable to discount the calls as just another hoax.
Chief Sutter said there is no indication that any person or group has showed an intention to act on the threats. So far, no one has taken credit for making the calls — a sign to law enforcement that the motivations behind the swatting calls are different “than what they historically have been,” he said.
Chief Sutter said “swatting” started among video game users who would seek revenge against fellow gamers over the Internet. They would call in threats against a gamer’s home, watch the police response live from the video camera in that victim’s home computer and then take credit for causing the mayhem on the Internet.
“And all the intelligence information that we’re getting is saying that this is a twist on that traditional type of swatting,” the chief said. “The motivations seem to be different.”
Mayor Liz Lempert, who spoke at the meeting, said Princeton is not the only community effected. Other towns around the state and the country are “getting very similar computerized calls.”
Recently, there were 19 such incidents throughout New Jersey on the same day, Chief Sutter said.
Nationwide, threats have been made to malls, hotels and even the White House. Authorities believe that threats will be going to larger events or venues to create even bigger disruptions, Chief Sutter said.
Police are working with other law enforcement agencies, including the FBI, to crack the case. In particular, he said the FBI is helping coordinate all these investigations “under one umbrella.”
“They’re able to look at these things as a whole rather than taking hundreds of them indvidually,” Chief Sutter said. “They have the capabilities to put these things together, look for patterns and do that investigative work that could take us an extremely long time.”
Last week, around 100 representatives from various law enforcement agencies met in Princeton to discuss the investigations and plan next steps, he said.
From the schools’ side of things, Superintendent Steve Cochrane said the district had received six threats starting with the first swatting on April 28 at Riverside Elementary School. More followed, including two on the same day, June 8, to Riverside again and Johnson Park Elementary School.
Mr. Cochrane said that he had happened to be at Riverside on June 8 and heard the threat for himself. “I was pretty shaken,” he said.
In describing the response to the threats, he said officials will assess whether the school that has received the threat either should be put on lock down or shelter in place, which means students can move around the building but can’t go outside.
“I understand fully just the stress and the concern that these incidents are causing,” said Mayor Lempert, the mother of two daughters in the public schools.
Asked by an audience member about extra security at the upcoming high school graduation, Mr. Cochrane said there is a plan in place.
“We are prepared,” he said.