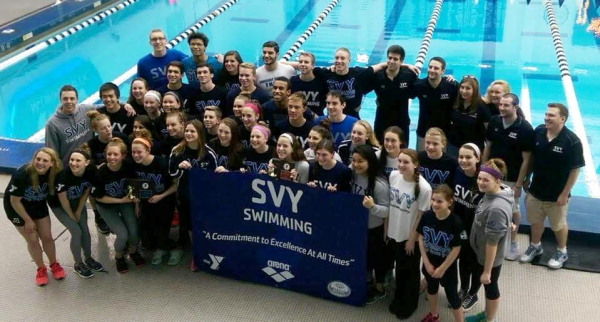 After a full weekend competing at the 2015 New Jersey YMCA state championships, the Somerset Valley YMCA swim team captured its sixth consecutive, and seventh overall, state championship title by its closest margin of victory ever.
“This was a true team effort that came down to the wire,” said Dan Roth, head coach. “Three great teams battled back and forth at every session of both meets to result in the closest margin of victory in the history of our program. It was great to see the determination of our older swimmers on display throughout the weekend. We have a very special group of seniors leading our program.”
From March 12-15, 85 Somerset Valley YMCA swimmers competed at the YMCA 13-and-older state championship meet held at Franklin and Marshall College in Lancaster, Pa. The 15- to 18 year-old girls placed first, while the 15- to 18 year-old boys placed second, in their age group categories. Combined with the scores earned by younger swimmers at the YMCA 12-and-younger state championships held last month in Ocean County, the team landed in first place overall out of 50 teams, edging out Lakeland Hills YMCA and Red Bank YMCA by fewer than 100 points.
Somerset Valley YMCA swim team’s depth was on display throughout the weekend, highlighted by a successful defense of their state titles in both the 15- to 18-year-old girls and boys 400 medley relays.
The girls relay was a thrilling race that came down to the last lap. Seniors Katrina Kuhn (Bishop Ahr High School), Jess Ambrose (Hunterdon Central) and Holly Christensen (Hunterdon Central) teamed up with junior Julia Bland (Montgomery) to earn the win in dramatic fashion.
“We’ve got a great group of girls who work very hard and love to compete,” said Roth. “They just have a way of getting their hand on the wall when they need to.”
The boys’ relay race was a decisive three-second victory in record-breaking fashion. Senior Brad Zdroik (Hillsborough), fresh off two individual NJSIAA high school state championships, joined fellow seniors Winston Chu (St. Peter’s Prep), Joe Delbuono (Rutgers Prep and Hillsborough resident) and junior Sam Hendrix (Hillsborough) to re-break the team’s own Franklin and Marshall pool record, which was set last season.
“Our boys are on a great run in the medley relays, and to be faster than we were at this meet last year is encouraging for Y Nationals,” said Roth.
The younger swimmers showed their talent in the pool during the 12-and-younger state meet in Ocean County. The 10-and-younger girls won first place overall, highlighted by a victory in the 200 medley relay. The 11-12 age group also excelled, tallying their highest total age group score in three years.
“We are extremely proud of our swimmers and their families, whose hard work and dedication resulted in this very impressive accomplishment,” said David M. Carcieri, president and CEO. “Congratulations also to the coaches who motivate and encourage the swimmers all season long and inspire true team spirit.”
Somerset Valley YMCA swim team has now won seven state titles (2006, 2010-15). The swim program is currently ranked 42nd overall nationally in USA Swimming’s virtual club ranking, out of more than 2,600 registered swim programs. In 2015, USA Swimming awarded the program with silver medal status through its Club Excellence Program.
As a cause-driven organization, the Y supports youth development and seeks to nurture the potential of all children and teens. The Somerset Valley YMCA Swim Team has more than 350 swimmers who compete at all levels and who practice at YMCAs in Bridgewater, Hillsborough and Somerville. All are branches of Somerset County YMCA.
For information about Somerset Valley YMCA swim team, including tryout dates, visit www.svynj.org. 