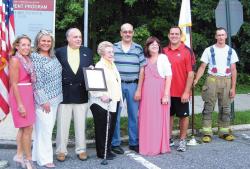 Louis Michael Lettieri was honored by the Township Council with the posting of a secondary street sign on June 29, as part of the township’s Veteran Street Sign Program.

He served as a sergeant in the U.S. Army in Company C of the 783rd Military Police Battalion as a military policeman, participating in the Normandy Invasion in 1944.

He traveled to England on the Queen Mary, which had been converted to a troop ship.

He served in the European Theatre, France and Belgium during World War II and was honorably discharged at Fort Dix in November 1945.

Lettieri married Angela Viscardi in 1949 and lived in Brooklyn and Staten Island, New York. They were married for 39 years and had three sons, Paul and his wife Linda, Thomas and his wife Colleen, and Robert and his wife Judith; six grandchildren; and three great-grandchildren.

The Lettieris moved to North Brunswick in 1966, facilitated by Lettieri’s employment at Rutgers University, first as a senior accountant and eventually as assistant controller. He retired from Rutgers in 1988.

The Veteran Street Sign Program allows township residents who were wartime veterans to be recognized by adding their name on a secondary street sign to an existing municipal road.