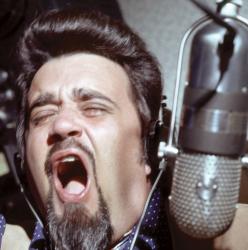 Wolfman Jack With so much music out there to listen to, it always helps to have a good navigator. Such is the radio disc jockey, or DJ. And through the decades, a few are remembered as the ones who introduced America to its greatest hits.

The term “disc jockey” was coined in 1935 by radio commentator Walter Winchell in a reference to Martin Block, who, as he played records to an audience anxiously awaiting details of the Lindbergh baby kidnapping, created the illusion that he was broadcasting from a ballroom peopled with live bands. The show, “Make Believe Ballroom,” made Block the first star announcer.

Alan Freed, a.k.a. Moondog, still is commonly referred to as “the father of rock and roll” due to his introduction of the term on the radio, as well as his promotion of the genre. Freed also featured black artists on his program rather than cover versions by white artists. In 1959, when it was revealed he’d accepted payola (the controversial practice of paying a DJ in exchange for playing a song), his career was irreparably damaged, and the resulting publicity ensured no prestigious station would again hire him.

“Clap for the Wolfman!” exhorted The Guess Who in their 1974 hit, referring of course to Robert Weston Smith, or “Wolfman Jack,” whose trademark bass voice and howling persona allegedly was derived in part from his love of horror films. Smith’s over-the-top style grew so popular that he was featured in movies such as American Graffiti, several TV shows and commercials, numerous voice-over roles, and as the host of a self-titled variety series in 1976.

The son of Lebanese immigrants, Kemal Amen “Casey” Kasem was, like Wolfman Jack, an actor and voice-over artist as well as a star DJ. He is best known as host of the syndicated American Top 40 countdown radio show, though fans of Scooby-Doo, the Saturday-morning cartoon, remember him most as the voice of Shaggy. Kasem hosted American Top 40 from its inception in 1970 through 1988, and again for a stint between 1998 and 2003. Inducted into the National Radio Hall of Fame in 1992, Kasem credited his success not just to his “guy next door” voice, but also to an interest in the stories behind the artists and songs with a positive focus.”

From mailroom clerk to iconic host of American Bandstand, perhaps the most beloved DJ of all time is Richard Wagstaff “Dick” Clark. Clark took over the show in 1956 and hosted it for the next 30 years, smiling as the chart-topping bands performed and several generations of teens danced to the latest pop hits and rated songs. (“It’s got a good beat and you can dance to it” was the most common justification for a top-rated song). A 1990 Rolling Stone interview noted that “over two-thirds of the people who’ve been initiated into the Rock and Roll Hall of Fame had their television debuts” on his show, while Hank Ballard, composer of “The Twist,” once remarked that Clark, in the show’s early days, was “bigger than the president!”

But has technology killed the radio star? It’s been said that, after MTV, music became “more a visual medium than a listening experience,” and that DJs are “no longer artists but script readers,” thanks to corporate agendas. Others claim that some modern young voices are transforming a dying medium in their weekly, commercial free shows, “introducing undiscovered talent and fostering artist-to-fan interaction.”

It’s a safe bet that it’s a mission those first pilots of the airwaves would approve.