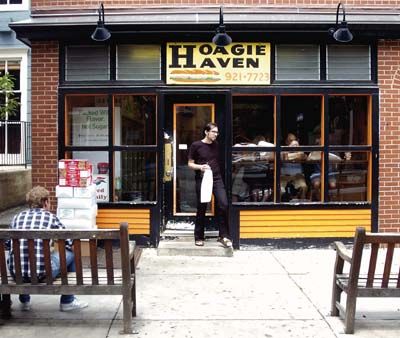 By Philip Sean Curran, Staff Writer
In Wednesday’s mid-afternoon heat, Stephen Barksdale sat in front of a Hoagie Haven turkey sandwich that he was washing down with a bottle of Gatorade.
He said he never went to the Subway restaurant located just a few doors away on Nassau Street — a sentiment that loyal customers of Hoagie Haven also expressed Wednesday after the corporate competitor closed its doors this week.
In the battle of chain restaurant versus local favorite, the little guy won — big. After a little more than a year in business, Subway is empty, much like it was during its brief run on Nassau. A spokeswoman for Subway’s corporate office could not be reached for comment.
With sandwiches in hand, customers of Hoagie Haven, at 242 Nassau St., said Wednesday that it came down to “loyalty” as to why they never strayed from the sandwich shop that has been open since 1974.
Griffin Peck said Hoagie Haven is a “staple of Princeton.” He called it a poor strategic decision to open a competitor so close, at 252 Nassau.
“It’s a loyalty thing,” said Nancy Weinstein, who works in Tigerlabs located just above the now since-closed Subway. “People were loyal.”
For his part, Costa Maltabes, who owns Hoagie Haven with his two brothers, was not gloating.
On one hand, he said he was glad a small business was able to succeed against a national franchise. On the other hand, he said he was sad for the Subway franchisee who failed.
“I wasn’t in a war,” Mr. Maltabes said.
He said he was not worried when a Subway decided to open up on the same side of Nassau, in the same part of town. He found that decision surprising.
Hoagie Haven has been a fabric of the community, a place that boasts that it has “the best hoagies on earth or any place else.” Inside the small store, there are photos of customers looking back from around the world with their Hoagie Haven shirts.
In Princeton, there are a few chain restaurants, including a Subway on Witherspoon Street. But Hoagie Haven customers stay true to the brand.
For example, Billy Hawkey said he went into the Nassau Street Subway once and walked right out. And Ms. Weinstein said the few people that she saw inside looked to be from out of town.
The Subway vs. Hoagie Haven battle provided grist for social media.
“Yay for local businesses,” read one Twitterer’s tweet. 