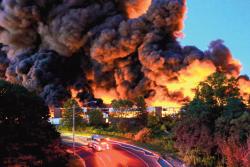 A fire has been burning for days at the DCH Collision Center on Livingston Avenue in North Brunswick since first igniting around 2:30 a.m. on July 22. PHOTO COURTESY OF KEN TERNLUND NORTH BRUNSWICK — Residents who were evacuated due to a massive warehouse fire in North Brunswick last week finally returned home on Sunday, just in time for the investigation to begin.

The nine-alarm blaze at the 650,000- square-foot DCH Collision Center on Livingston Avenue is “declared out,” according to township Fire Chief Donald Salzmann, Sr., the on-scene fire commander since the fire first started at 2:30 a.m. on July 22.

Although the fire department is responding to minor flare-ups as they occur – including “a small restart late [Sunday] night that was quickly put out,” according to township Business Administrator Robert Lombard – environmental officials cleared residents of the Hearthwood condominium complex to return to their homes around 2 p.m. Sunday. 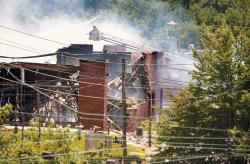 The fire that completely destroyed a warehouse on Livingston Avenue in North Brunswick is finally declared “out.” Residents were able to return home on Sunday. The investigation is continuing. PHOTO BY FRANK WOJCIECHOWSKI “The hazardous materials air quality group found nothing inside the units they inspected. No smoke. No damage. No soot,” Lombard said.

Lombard said that fire equipment will remain on scene in case of an incident.

He also said that a few apartment doors were fixed prior to Mayor Francis “Mac” Womack and council members Cathy Nicola, Carlo Socio and Ralph Andrews welcoming back residents, each of whom received cleaning products and information. 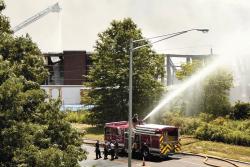 PHOTO BY FRANK WOJCIECHOWSKI Womack thanked the hundreds of volunteers and staff members who have been assisting with the fire.

– Kayla Marsh contributed to this story. 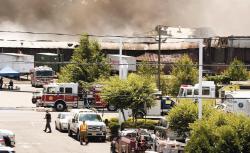