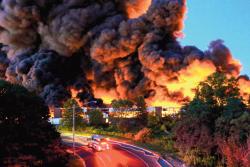 A fire had been burning for days at the DCH Collision Center on Livingston Avenue in North Brunswick since first igniting around 2:30 a.m. on July 22. Residents were allowed to return home on July 26 after the fire was declared “out.” PHOTO COURTESY OF KEN TERNLUND Residents who were evacuated due to a massive warehouse fire in North Brunswick last week finally returned home on Sunday, just in time for the investigation to begin. The nine-alarm blaze at the 650,000- square-foot DCH Collision Center on Livingston Avenue is “declared out,” according to township Fire Chief Donald Salzmann, Sr., the on-scene fire commander since the fire started around 2:30 a.m. on July 22.

Although the fire department is responding to minor flare-ups as they occur — including “a small restart late [Sunday] night that was quickly put out,” according to township Business Administrator Robert Lombard — environmental officials cleared residents of the Hearthwood condominium complex to return to their homes around 2 p.m. Sunday. 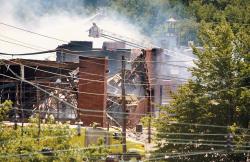 The fire that completely destroyed a warehouse on Livingston Avenue in North Brunswick is finally declared “out.” Residents were able to return home on Sunday. The arson investigation is continuing. “The hazardous materials air quality group found nothing inside the units they inspected. No smoke. No damage. No soot,” Lombard said.

Lombard said fire equipment would remain on scene in case of an incident.

He also said that a few apartment doors were fixed prior to Mayor Francis “Mac” Womack and council members Cathy Nicola, Carlo Socio and Ralph Andrews welcoming back residents, each of whom received cleaning products and information.

“Most residents are in without any complaints,” Lombard said. “We are pleased all the residents are back home.” Officials from the New Jersey Department of Environmental Protection, the United States Environmental Protection Agency and the Middlesex County Health Department will continue to monitor the site and surrounding areas for air and water quality concerns. Thus far, officials claim there are no concerns of toxins in the area. 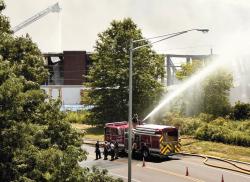 “This was a terrible event for the property owner, for the building’s business tenants who sustained losses, for the residents of Hearthwood who had to be evacuated, or for their neighbors nearby and downwind of the fire, who have endured the smoke which descended on their neighborhoods for several days after the blaze,” Womack said.

Not many residents needed to take advantage of the facility, but Linwood Middle School was set up as an American Red Cross shelter last week after the fire.

The shelter opened around 5:30 a.m. July 22, just three hours after the blaze began. 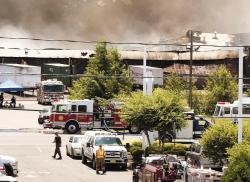 PHOTOS BY FRANK WOJCIECHOWSKI No one needed to stay at the shelter overnight on July 22 because of hotel stays or other arrangements with families or friends, according to Erica Viviani, communications manager for the American Red Cross’s North Jersey Region. But 11 people did sleep on cots in a makeshift dormitory the night of July 23.

“We were very concerned the winds could shift and prompt further evacuation,” Viviani said of the need to keep the shelter open after 11 residential buildings in the North Brunswick Manor, Hearthwood at North Brunswick condominiums and Birchwood Apartments were evacuated due to smoky conditions in the area.

The shelter also served as a reception area so that residents could come in and out to receive information, as well as meals donated by the North Brunswick school district.

“It is a place for people to feel safe and comfortable while waiting for updates,” Viviani said.

She said at least 100 people had checked in since the shelter opened, and about a dozen used the 20 cots set up in the rest area.

Viviani said the entire experience is an opportunity to remind residents to have a go-bag in their front closet with a change of clothes, water and important documents.

“It’s a good opportunity for people to start thinking about emergency preparedness,” she said.

Going forward, the work at the fire scene will continue as the arson investigation is underway, according to Lombard. He said police would maintain security on site until the investigation is complete.

The owner of the property has a heavy equipment contractor on site to help in exposing areas to begin the preliminary demolition work, Lombard said.

An environmental firm on scene will also continue to check for water quality issues, he said.

As the emergency situation subsides, Womack thanked the hundreds of volunteers and staff members who have been assisting with the fire since its onset.

“I want to commend the incredible response from township, county, state and federal emergency responders and agencies who came from across our state to assist us in dealing with this fire, clearly the biggest fire in our township history.

“But I take will also take away from this calamity a tremendous gratitude and appreciation for the awe-inspiring efforts of so many individuals from across the state who came to our aid. From the bravery of police and firemen who helped evacuate residents from Hearthwood in the middle of the night on Wednesday; to the dedication, professionalism and coordination of hundreds of firefighters from as far away at Pennsylvania throughout Wednesday to Friday; to the fire companies in Middlesex County who have rendered mutual aid to the township since the fire; to the regional presence of first aid and rescue teams ready to assist with injuries, which were fortunately minor; to the support from Middlesex County Emergency Management, Health and Hazmat Teams; New Jersey State Fire, Police and Environmental Protection officials; to the federal fire and Environmental Protection Agency officials; to the Salvation Army which has provided food and drink to first responders at the fire scene; to the Red Cross for providing food, shelter and comfort to our displaced residents; to the American Water staff at our water plant; and to South Brunswick for maintaining water supply — to all of these professionals and volunteers who have been on-scene round the clock over the past five days, I cannot thank them enough for their incredible service and support,” Womack said.

He also said he cannot overlook the leadership and expertise of Salzmann, who had only left the fire scene for a few hours since he arrived with the first responding fire units on Wednesday.

“The character of a person is truly revealed when they are confronted by challenge, and this fire was no doubt the biggest challenge of Chief Salzmann’s firefighting career. It is even more remarkable to note the fact that he and so many others who have participated in this team effort were here as volunteers. Chief Salzmann’s conduct over the past five days will forever symbolize to me what these emergency responders do every day — they come to our rescue. He is, and they are, what we define as a hero. We owe him and all of these everyday heroes our deepest, heartfelt thanks and appreciation for what they did here and do every day,” Womack said.

For updated information, visit www.northbrunswicknj.gov, the township’s Nixle and Facebook pages, or call 732-247- 0922.

– Kayla Marsh contributed to this story.