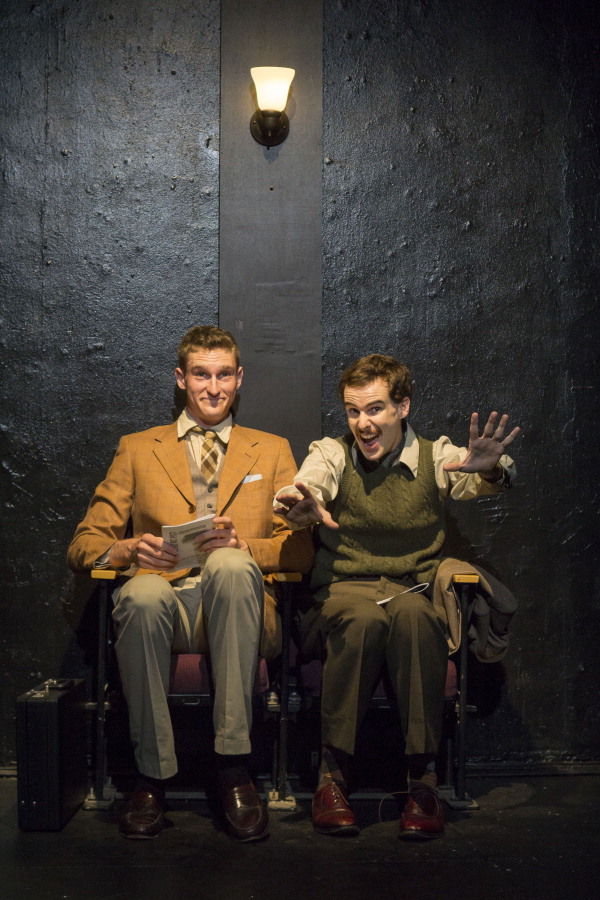 By Bob Brown
I laughed myself silly at Hamilton Murray Theater, and you will too if you catch the two one-act farces being staged by Princeton Summer Theater through Aug. 2. These are in keeping with the Princeton Summer Theater’s theme “of adaptation and myth, exploring how stories are retold and passed down through time.”
Director Brad Wilson writes in the program that these two plays “fixate on the biological requirement of fanciful thinking. They both understand that the human brain winds it way around wishes and fears and refracts them back to us in ways we don’t expect.”
But you don’t have to employ neuro-, bio-, or any other logical analysis to get a kick out of these one-acters. In fact, critical over-intellectualization is satirized pointedly in Tom Stoppard’s The Real Inspector Hound (note to self: don’t overanalyze). Just sit back and let the flood of ridiculousness wash over you.
Christopher Durang is well known for slicing and dicing theater in his neo-absurdist plays. The Actor’s Nightmare is based on a common actors’ dilemma — fear of forgetting the lines (an experience Mr. Durang himself has had when performing even his own works). In this short piece, an accountant who finds himself in a theater (Evan Thompson) is grabbed onstage by the stage manager (Caroline Hertz), who pushes him to stand in for the main actor, Eddie Booth, who has broken both legs.
He is called variously “George” or “Stanley,” depending on what director or assistant accosts him or pushes him into what scene from whatever play. The action rushes through a mash-up of plays that snag bits from Noel Coward (Private Lives), Samuel Beckett (Endgame and/or Happy Days), Shakespeare (Hamlet), and Robert Bolt (A Man for All Seasons).
When “George” doesn’t know what play he’s in, or what his lines are, a character playing “a maid” (Ms. Hertz) comes onstage to dust the props and feed him dialogue. He nervously soliloquizes from whatever theatrical scraps he can think up. Finally, he’s thrown on the chopping block in an execution scene as Thomas More. Some of the funniest scenes are courtesy of Bits Sola as Sarah in the Noel Coward vehicle, Maeve Brady as a Beckettian dustbin character, and Ross Barron as the actor Henry, playing Horatio in Hamlet (all the characters act out each word with wild body movements).
Mr. Stoppard’s play, The Real Inspector Hound, has been breaking up audiences since 1968. It’s a tour de farce of language and theatrical excess. Two rival theater critics, Moon (Mr. Thompson) and Birdboot (Mr. Barron), are attending the performance of a whodunit that resembles Agatha Christie’s The Mousetrap (which McCarter Theatre is scheduled to perform next year, by the way). Characters are isolated in Muldoon Manor, set among dank, foggy marshes at the edge of a cliff, where roads lead in, but not out. As the radio warns of a handsome, well-dressed stranger lurking about, the Muldoon Manorites seem not to notice that Simon (Phil Rosen), a visitor, fits the very description.
As the plot thickens, cruxes are punctuated with dramatic musical cues and spotlights. Moon, who is a stand-in for a senior critic, reads out his pompous, draft of a review between acts. Birdboot fixates on the astonishing talents of one of the actresses, Felicity (Ms. Sola), who gets a puff in his draft review. It’s clear his reviews are really woos. Soon, he’s onstage, answering a prop telephone and literally getting into the action as rival actresses Felicity and “Cynthia Muldoon” (Ms. Brady) spar over him.
The play then shifts gears, as the two critics become part of the murder plot and the lines between actors, characters, and critics blur and dissolve in a heap. Mrs. Drudge (Sarah Cuneo), the Muldoon Maid, is the comic center. In a scene so funny that it had her fellow actors suppressing laughter, Mrs. Drudge circumambulates the parlor with tea, then milk, then, sugar, then biscuits, pausing at each Muldoonian in turn.
Mr. Stoppard springs every theatrical effect in the book, including overblown musical cues, hyperlighting, exaggerated pauses, and even some that literally bring down the house (or at least the ceiling). It’s enough to induce spit-soda-through-your-nose laughter. The entire cast just kills.
You can’t miss with these two comic masterpieces on the same playbill. And that’s the pomposity-free truth.
The Actor’s Nightmare and The Real Inspector Hound continue at the Hamilton Murray Theater on the Princeton University campus, through Aug. 2. Tickets cost $27.50, $22 students and for matinee performances. For information, go to www.princetonsummertheater.org or call 732-997-0205.