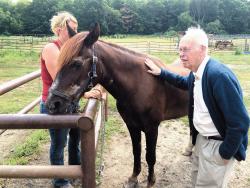 “Most of our residents have been around horses all their lives. I like to do programs that are memorable experiences,” said Stephanie Gaber, recreational director of Brandywine Senior Living at Princeton.

On July 30, Superior Horse Farms in Monroe greeted a group of Brandywine residents who were aged 83 to 95.

For many residents, being around the therapy horses brought back memories of past experiences.

“For my eighth birthday, for some reason, I was convinced I was going to get a horse, and instead my parents gave me a set of encyclopedias,” Nancy Pike reminisced as she stroked a therapy horse named Princess.

Before the trip, she had been unfamiliar with therapy horses.

“My first one to ride was jolly, and that was many years ago, but I still remember my first experience — and I always wanted to go fast.” 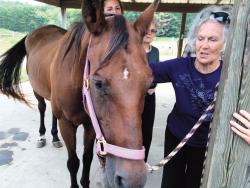 Above left: Audrey McDonald strokes Princess, a therapeutic horse, at Superior Horse Farms in Monroe on July 30. Above right: Nancy Pike, left to right, Kirk Wedemeyr and Donald McClure meet Princess, a therapeutic horse. “I did ride horses in Britain. I used to gallop over the ups and downs like a madwoman. I love horses,” said Audrey McDonald, who was born in Scotland.

“One of my dreams was fulfilled when I was younger. I had friends who had a place in Puerto Rico and I got to ride in the lowlands, then into the beach and into the water. That was one of the things I always wanted to do,” said McDonald, who used to compete at a low level. She also used to ride in Colorado.

“Particularly for women, it’s very important because [horses] are such large animals,” McDonald said. “For women of my generation, it’s something that you can control and do; there’s freedom in it.” 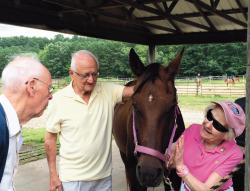 For Lorain Rylac, this was the first time in a number of years she had been around horses.

“The only time we saw a horse was when they would come through the neighborhood with a little pony. You’d pay so much to ride a couple feet with the man and back again. You don’t see them anymore in the neighborhoods. I guess that’s old stuff now,” Rylak remembered as she admired several horses congregating.

At Superior Horse Farms, which has been in existence since 1980, multiple therapy horses are used to comfort guests.

“Most of our horses are very quiet. We don’t deal with rambunctious young horses. We’ve taught them to be a certain way around people so they’re not going to bite you or do anything wrong. They’re peaceful because we want them to be,” said Megan Farmer, whose family owns the farm. “We are a family-owned business, so that is what we want it to feel like: a peaceful and tranquil atmosphere for everyone.”

For the farm, the horses are a product of the peaceful environment they were raised in.

“[We] have not used anything but affection. We do not use whips and we do not use anything that would be scary for them. And we treat them with kindness,” said Shannon Farmer.

For more information on the therapy horse program, visit www.superiorhorsefarm.com.