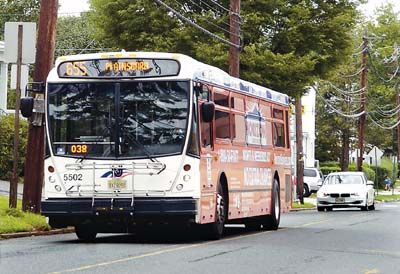 By Philip Sean Curran, Staff Writer
Princeton University will help fill a public transportation hole left by NJ Transit by adding a stop at Palmer Square on one of its TigerTransit bus lines that goes to University Medical Center.
The school announced Tuesday that starting in September, its Forrestal Campus/Princeton Plasma Physics Lab line would stop at the Square every hour beginning at 7:55 a.m. and ending at 6:55 p.m. University director of community and regional affairs Kristin S. Appelget said the bus runs weekdays.
That line already goes to the hospital, and is free and open to the public — not just university staff and students. No identification is required to board the bus, she said.
The added Palmer Square stop is part of an effort to provide transportation options for patients and others who need to get to the hospital and won’t have the NJ Transit 655 bus to do so after the end of this month.
NJ Transit is eliminating that bus effective Sept.1 as part of a larger combination of service cuts and fare hikes systemwide that the transportation agency will phase in. Both measures were necessary to close a budget shortfall, NJ Transit has said.
In the meantime, hospital and municipal officials have been discussing other options that the hospital could do for patients. The hospital is scheduled to appear before the council on Monday with a proposal for an on-demand taxi service for people who live near the old hospital site on Witherspoon Street.
“It’s for people who may have been relying on the 655 bus and who previously (were) able to walk to the hospital,” Councilwoman Heather H. Howard said Thursday.
She said the service would be available for patients or people visiting the hospital.
A hospital spokeswoman said Wednesday that she had “nothing new to share at this time.”
Mayor Liz Lempert was not available for comment.
The added TigerTransit stop and the taxi service have been raised as options for people who might not have access to a car and need to get to the hospital.
The university bus services makes stops through the region — a free alternative to NJ Transit. To learn more, visit www.princeton.edu/transportation.
Smartphone users can download an app, TigerTracker, that allows them to track the progress of the bus.