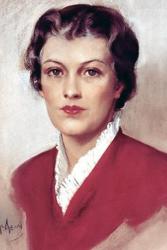 1936 “portrait” of Betty Crocker, as imagined by artist Neysa McMein If there’s one thing Americans enjoy almost as much as good food, it’s watching others cook it. Variety shows and Westerns have come and gone, but the cooking show endureth forever … or at least it has for nearly a century, with no apparent signs of stopping.

Interestingly, some of the first cooking show hosts weren’t even human. Betty Crocker — “The First Lady of the American Kitchen” — was created by Marjorie Husted in a 1921 ad campaign for Washburn- Crosby Company, a precursor of General Mills. Betty became the spokeswoman for questions the company received from homemakers about baking conundrums. By 1924 “she” was offering cooking expertise on the radio.

In 1946, actor-turned-caterer James Beard debuted the first televised cooking program, “Elsie Presents James Beard in ‘I Love to Eat.’ ” Viewership was low since TVs were still only in about 10 percent of American homes, but the stage had been set for a host of imitators (and innovators). 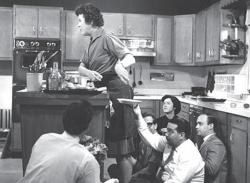 Julia Child on set in 1963 A primary key to the cooking show’s lasting popularity is its ability to evolve with the changing role of food. Julia Child both introduced and took the fear out of French cooking with her approachable style and carefree attitude toward mistakes. “Galloping Gourmet” Graham Kerr’s audience was as charmed by his goofy humor and unorthodox stage entrance — leaping over a chair with wineglass in hand — as they were his butter, cream and spirit-laden recipes.

The recession of the early ‘70s put a new focus on practicality, embodied in LaDeva Davis on PBS’ “What’s Cooking?” The down-to-earth host, whose motto was “Eat well, save money,” assured fans that quiche Lorraine was simply egg pie and put a new twist on an old favorite with her BLT comprised of brains, liver and tongue.

It’s been said that the aim of cooking shows eventually shifted from teaching viewers not merely how to prepare food, but also how to live, and no media personality better illustrates this than Martha Stewart. “Let’s face it, she elevated American taste,” noted Cornell University professor Joan Jacobs Blumberg.

But will celebrity cooks continue to challenge and teach us in the years ahead? Some lament that today’s viewers have no patience; others, that the food element is disappearing. One thing at least is certain: No matter what direction the genre may take, as public television chef Ming Tsai put it, “At the end of the day, you still have to cook.”