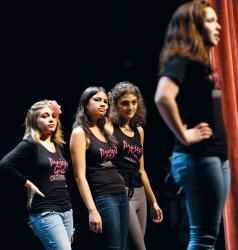 Tiff Roma (l-r), Isabella Olaguera, Aya Abdelaziz and Tess Cronin, of the Project Girl Performance Collective, act out a bullying scenario on Oct. 2 during an empowerment program presented as part of the Week of Respect at Red Bank Regional High School in Little Silver. JEFF GRANIT staff October is a bad month for bullies.

It’s National Bullying Prevention Month, and schools across the state are staging programs and initiatives to tackle a problem that affects more than half of their students during their academic careers.

Students and teachers are collaborating to break down walls and open up lines of communication; to empower students; and to foster a climate of understanding and respect.

According to data released by the state on Oct. 2, there were more than 12,000 confirmed incidents of harassment, intimidation and bullying in New Jersey school districts in the 2011-12 school year — the first year the New Jersey Anti-Bullying Bill of Rights Act (ABBRA) mandates were in effect. 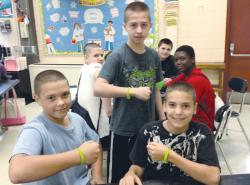 Jackson students show off their commemorative wristbands, signifying that they’ve made a pledge to stand up against bullying in their schools. PHOTO PROVIDED BY JACKSON SCHOOL DISTRICT Overall, more than 35,000 incidents were reported.

Under ABBRA, every public school in the state is required to have designated antibullying personnel, conduct specific training programs and events, and follow new reporting guidelines.

“It’s about changing the culture,” said Red Bank Regional High School Principal Risa Clay, “and that takes a lot of time and a lot of effort. “The goal is to get kids to understand that it’s OK to talk, that these are discussions that need to be had, that this is a safe place to discuss those things, and that also we don’t tolerate this kind of behavior.”

ABBRA is an extension of the state’s original anti-bullying law first enacted in 2002. Passed in 2010 and signed into law Jan. 5, 2011, the mandate came on the heels of the highly publicized suicide of Rutgers University student Tyler Clementi, who jumped off the George Washington Bridge after learning that his freshman roommate had used a hidden webcam to videotape him kissing another man, and then discussed the incident on the Internet.

View the video: http://www.youtube.com/watch?v=7-X3Pu20w24 School districts throughout Monmouth, Middlesex and Ocean counties began the month with a Week of Respect Oct. 1-5, a series of anti-bullying activities that went well beyond lectures and role-playing.

Some 1,100 students at Red Bank Regional High School participated in theatrical performances, presentations, poetry readings, flash-mob dances and more, as part of the effort to raise awareness and foster openness in the initiative against bullying.

On Oct. 2, the Little Silver school welcomed the Project Girl Performance Collective, a group of performers ages 12-22 who write and perform scenes that tackle issues like self-esteem, identity, discrimination and understanding from a youth perspective.

Students, male and female, told the performers that the show made them feel better about themselves and that it was reassuring to know that many of the issues they struggle with personally are more widespread than they thought.

“Lots of other people don’t really support the things that I do, like gay rights,” said one student. “I was very happy to know that other people understood what I felt.”

Cheryl Washington, RBR’s anti-bullying officer, said that by fostering a climate of openness, education and understanding, the school can help students break down the barriers that lead to bullying incidents in the first place.

“I think first and foremost, the students really have to be accepting of other people’s differences,” she said.

RBR also addresses bullying through The Source, a school-based youth services program that provides counseling and other support services.

“Our job is to work with these kids to change the climate and the culture of the school by teaching them healthy coping, healthy ways to deal with conflict resolution,” said program coordinator Suzanne Keller.

Magician Jeff Blum conjured positive thinking and important life lessons for students during the Week of Respect at Memorial Middle School in Spotswood.

Blum’s show, “Respect Magic,” delighted students, while informing them about the importance of self-esteem, teamwork and respecting others.

Principal Pam Slevin said Blum’s show at an Oct. 1 assembly was a way to engage the students, while teaching them invaluable lessons.

For middle school students, Slevin said the lessons the school hopes to impart during the week are vital in this stage of their development.

“One of our primary goals here is … helping the kids resolve conflicts and teaching them how to do it in a mature fashion. … What’s the tool set that you need to resolve them? … The biggest thing that I think we can do for young people is to give them that set of tools.”

Elizabeth Marhold, guidance counselor at the school, agreed and said the school’s mission goes beyond education.

“We’re building character,” she said. “We want them to respect [each other’s] differences and understand them.”

As the new anti-bullying initiative took effect, Long Branch Middle School students jumped aboard, creating an anti-bullying video that took them to New York City and the White House. Teacher Kristen Catrambone coached students while they created a video to speak out against bullying during the 2011 school year.

The eighth-graders became Internet sensations after “Bullying, We’ll Stop It,” recorded to the tune of Enrique Iglesias’ hit song “I Like It,” was posted on YouTube. The video quickly became a hit, with Iglesias even posting links to the video on his Twitter and Facebook pages.

After the video went viral, Catrambone and her class took their message to the “Today” show, where they were interviewed by NBC anchors. As of last week, the video had more than 216,000 views.

Personal experience led Howell High School freshman Aidan Benavides, of Marlboro, to found Aidan’s Voice, a nonprofit that will hold the 5K Walk Against Bullying on Oct. 27 at Thompson Park in Monroe Township.

“It’s open to all ages. Everyone can do a walk. It’s so universal,” Aidan said of the event. Aidan’s Voice is also hosting a cupcake sale at Cupcake Magician in Red Bank. The group will receive money for every red velvet cupcake sold at the shop in October.

He started Aidan’s Voice in 2011 after being bullied because of his involvement with the performing arts.

“At times, it still does get to me. Life isn’t perfect. High school is not a wonderland, but I practice what I preach. I take from my own motivation,” Aidan said.

Students in the Manalapan-Englishtown Regional School District will participate in activities that embrace respectful behavior this month, including wearing designated items of clothing during the Week of Respect. Students at Clark Mills School wore jeans to signify that respect is in their “genes,” while sweatpants and sweatshirts represented that “being respectful is no sweat.” Lafayette Mills School students in grades three to five are developing a school song to promote respect, and at Wemrock Brook School, grades one to five are creating paper chains of respect that will link the entire school community.

“I think we have definitely seen a decrease in bullying behavior and an increase in positive behaviors,” said Cindy Margulies Cimino, assistant director of pupil personnel services. “We have really focused on engaging the bystanders who make up 85 percent of the student population.”

At Manalapan Englishtown Middle School guidance counselors are hosting presentations focused on respect, kindness and anti-bullying as well as the Peer Helper program, which challenges students to think about classmates who have been good friends to them, displaying kindness, respect and other positive characteristics.

Students in the Matawan-Aberdeen Regional School District are demonstrating respect in similar ways. At Lloyd Road, students are involved in a School Climate student survey that will be presented to the entire student body Oct. 19 at an assembly titled “Celebration of Friendship and Kindness.” At the assembly, students will view a video made by classmates about the importance of respect and tolerance. Matawan Aberdeen Middle School students are symbolically trashing bullying by throwing pieces of paper into trash cans. At Matawan Regional High School, students are writing words of hate on paper, then placing them in a tank of water as a symbol of dissolving hate.

Kadayjah Smith, RBR senior and member of the school’s Harassment, Intimidation and Bullying Committee, said students can help change the culture that leads to bullying by getting actively involved.

“A lot of people know the meaning of respect, but it’s easier said than done,” said Smith, who participated in the Week of Respect by reading respect-related quotes over the PA system at the beginning of the school day. “You have to lead by example. You have to practice what you preach or else no one will look up to you.”

When asked if she thought bullying could ever be completely stopped, Smith is realistic.

“It’s very complex,” she said. “I think that no matter what, there is always going to be some type of bullying going on.

“There are some people that were bullied, and they pick weak people to bully as well, just to not have to deal with getting bullied themselves.

“But I like what my school is doing. It’s basically an eye-opener. Just by seeing different scenarios today, I see how people can actually be affected, and it makes me not want to stand by and let it happen.”