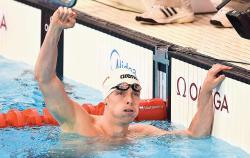 Rumson-Fair Haven Regional High School graduate Connor Jaeger, competing with Team USA in Kazan, Russia, at the 2015 FINA World Championships, set an American record and claimed a silver medal at the championships. Jaeger’s time of 14:41.20 bested the 11-year-old American record of 14:45.29, set by Larsen Jensen at the 2004 Olympic Games. The time was the second-fastest in the world this year, behind gold medalist Gregorio Paltrineri of Italy and is the seventh-fastest time ever swum in this event. Jaeger competes collegiately for the University of Michigan. America’s newest 1,500-meter freestyle record holder, Connor Jaeger, got his start at the Central Jersey Aquatic Club (CJAC) in Ocean Township.

CJAC head coach Corinna Weinkofsky remembers Jaeger standing out at a young age — he started swimming with the club at 8.

“He definitely was very, very talented as a youngster,” she said. “In high school, he did have national qualifying times.

“He was always a hard worker who absorbed everything.”

Jaeger had something else going for him.

“He loved to race; that was his thing,” Weinkofsky said.

That hard work and competitor in him made Jaeger an all-state swimmer for Rumson Fair Haven Regional High School, a multiple All-American and national champion at the University of Michigan and a U.S. Olympian and World Championship team member.

Weinkofsky noted that it was in college that Jaeger began to excel in the longer distances — 1,000 and 1,500 meters.

Jaeger broke the 11-year-old American record of 14:45.29 set by Larsen Jensen at the 2004 Olympics in Greece. His new American record ranks seventh all-time in the world and is the second fastest in 2015.

Weinskofsky, who has stayed in contact with her former swimmer, reported that Jaeger is very proud of his record swim.

“The American record means a lot to him because of the high regard he has for Jensen,” she said.

The race, she added, was an example of Jaeger’s consistency.

“His splits were within two-tenths of each other for second every single lap,” she said. “That’s focus.”

The 1,500 meters is a 30-lap race that requires complete concentration.

The silver medal was the second medal of Jaeger’s career at the World Championships. He took bronze in the 400 meters in 2013 in Barcelona, Spain.

The Rumson-Fair Haven graduate won three medals at the 2014 Pan Pacific Championships in Gold Coast, Australia, taking gold in the 1,500 and bronze in the 400 and 800 freestyle events.

Jaeger, who now swims for Club Wolverine and is sponsored by Arena, will turn his attention to the 2016 Olympics in Rio de Janeiro.

Jaeger will also appear on the big screen. He is going to be one of the featured swimmers in an upcoming documentary about competitive swimming called “Water Is My Sky.”

Another subject of the documentary is Middletown’s Tom Wilkens, who won a bronze medal in the 200-meter individual medley at the 2000 Olympics in Sydney, Australia.

A graduate of Christian Brothers Academy and Stanford University, Wilkens won a gold medal at the 2002 World Championships in Moscow, Russia, in the 400 medley.