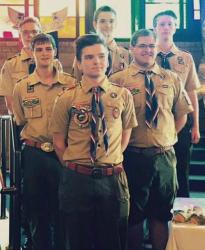 Six of the seven recently ranked Eagle Scouts from Troop 17 gather for a photo during their June Court of Honor ceremony. Pictured are Chris Saulys, front; center row, left to right, Anton Nelson and Brian Thomas; and rear, left to right, Joel Nadler, Nikolai Krebs and Chris Gough. PHOTO COURTESY OF ANNE NEWMAN Long after the seven recently ranked Eagle Scouts have flown off to their respective adult lives, many in the community will feel the impact of their service.

The young men, from Boy Scout Troop 17 Metuchen-Edison, have made lasting contributions to the community as they spent the past years earning the highest rank a Boy Scout can achieve.

“One of the most important aspects of Scouting is giving back to the community,” said Middlesex County Freeholder Charles Tomaro of Edison, a former Scout leader and longtime advocate for the organization.

Parishioners at local churches, hikers along the Dismal Swamp and Middlesex Greenway, campers at Kiddie Keep Well in Roosevelt Park, and those at the Knights of Columbus and St. Joseph High School have all benefited as the Scouts and their colleagues refurbished and beautified properties, created and enhanced trails, and built a fire grill and patio at Roosevelt Park.

“The endeavors on which I have personally assisted have focused on areas and issues that would never have been tackled without the Scouts’ help,” Tomaro said.

The projects are a great way to make improvements to the community at no cost to the taxpayer.”

The Eagle projects emphasize project management and challenge Scouts to plan, organize, supervise and implement service projects for the community while enlisting fellow Scouts, family and friends to help.

The projects are the culmination of years of achievement that typically begin at age 11, or after fifth grade, when a boy is eligible to become a Boy Scout.

To become an Eagle, Scouts must earn 21 merit badges for everything from cooking to first aid to camping; be active in their troop; show leadership through various troop positions, and demonstrate that they live by the principles of the Scout oath and Scout law of duty to God, country, others and self.

Many of the recent Eagle Scouts joined their fellow Troop 17 members on adventure trips, including a 75-mile, eight-day canoeing and portaging odyssey through the wilderness of Manitoba, Canada; a 10-day, 70-mile backpacking trek on the Philmont Scout Ranch in New Mexico, which included climbing to the summit of a 12,500- foot mountain; and paddling and backpacking 50 miles over five days in New York’s Adirondack mountains.

The seven Troop 17 Scouts achieved the rank of Eagle between summer 2014 and this summer.

Krebs created a hiking trail through the Metuchen portion of the Dismal Swamp, and constructed and installed a bench and sign there. Nikolai is a senior at Metuchen High School (MHS).

Nadler took on the construction of a brick grill and patio at Kiddie Keep Well Camp at Roosevelt Park in Edison. Joel is a senior at MHS.

Nelson constructed and installed a kiosk at the Metuchen trailhead of the Middlesex Greenway. Anton recently entered the U.S. Military Academy at West Point, N.Y.

Saulys undertook landscape remediation and beautification at St. Joseph High School in Metuchen. Chris is a freshman at New Jersey Institute of Technology in Newark.

Gough tackled the renovation of the stage at St. Luke’s Episcopal Church in Metuchen. Chris is a sophomore at Georgetown University, Washington, D.C.

Thomas repaired and refurbished the Knights of Columbus hall in Edison. Brian is a sophomore at American University, Washington, D.C.