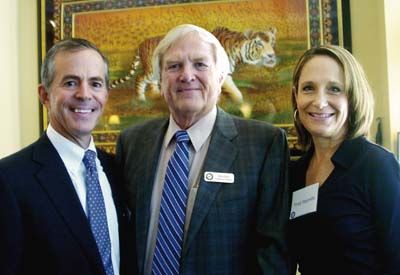 By Philip Sean Curran, Staff Writer
For all its affluence, Princeton is home to students who come from low-income families where going to college might be out of reach.
Scott Sipprelle and Bob Carr have set to change that — one kid at a time.
The two businessmen have donated $100,000 apiece to help current and future students at Princeton High School attend one of three colleges: Montclair State, Rowan University and the College of New Jersey. They appeared together at a breakfast event at the Nassau Club to announce what they had done and also encourage others to help their effort.
Mr. Sipprelle said they are “creating the capacity to fund and to start and to grow and deliver results for the earliest recipients of this program in Princeton.”
The $200,000 will go through the nonprofit Give Something Back Foundation that Mr. Carr started in 2003, to provide college scholarships to high schoolers in his home state of Illinois. Since its founding, the foundation has expanded to Delaware and New Jersey.
Give Something Back Foundation works by identifying students when they are ninth graders, specifically those who qualify for federal Pell grants. They have to apply for admission to the program and, if they are accepted, keep a 3.0 GPA through high school, take college prep courses and maintain good citizenship, said foundation senior vice president Kelly Dun, a former administrator at the Princeton Day School.
Students will be provided with mentors, go on college visits and take part in programming intended to prepare them for when the time comes to enter college.
“This is not just about giving money to kids. This is about creating the dynamic and the fabric of support that allows these kids to succeed and to graduate in four years,” Mr. Sipprelle said.
“A lot of the discrimination in this world is because we have such low expectations of so many people,” Mr. Carr said.
Mr. Sipprelle is a former executive at Morgan Stanley, who transitioned into becoming a venture capitalist. Mr. Carr formed his own company, Heartland Payment Systems. They came to know each other through their work on the board of the Historical Society of Princeton.
“At the time, I thought Bob was just one of these great, self-made success stories who started a business from scratch, made a bundle of money and then was sprinkling some of his life’s good fortune into charitable endeavors,” Mr. Sipprelle said. “But I was wrong.”
He recalled how Mr. Carr grew up poor and received a $250 college scholarship from the Lockport Woman’s Club in his hometown in Illinois.
“Many times gifts like that are forgotten fairly quickly. Bob never forgot it,” Mr. Sipprelle said. “In fact, it seemed to have become one of the guiding purposes in his life to remember and to live up to that belief in him from his woman’s club in his hometown when he was in high school.”
Information about the foundation can be found at its website, www.givesomethingbackfoundation.org, or by calling (609) 806-2642.