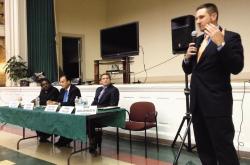 Candidates for the Red Bank Borough Council spoke in a debate on Oct. 1. A few flashpoint issues — municipal taxes, a perceived lack of diversity in Red Bank government — sparked debate during an otherwise civil Candidates Night.

With the general election a month away, four candidates faced off and made their case as to why they deserve to win election to two Borough Council seats.

The candidates fielded questions on a variety of issues that were raised by residents who packed the community room at River Street Commons on Oct. 1.

“What is it that you plan to do to include more [African American and Hispanic] residents in what we do in the town [and] in the political process, or just hearing their voices and their concerns,” Memone Crystian, former director of parks and recreation, asked of all four candidates.

Taylor, a member of the parks and recreation committee, was the first to respond.

“We need to incorporate much more of the population in Red Bank, and a lot of our Hispanic families feel marginalized by not having access to the same services other residents have access to,” he said.

“A large part of our Hispanic community is being left out by Red Bank,” he said, claiming that an effort to form a sports league for Hispanic members of the community had been stalled by the administration.

“When we, as the leaders of our community, don’t act upon the well- thought-out plan by our Hispanic community, we are effectively turning them away.”

The candidates were also asked about their views on the proposed restoration of Marine Park, which has become a contentious issue in the borough. Three proposals have been submitted to the parks and recreation committee for the park.

“I want to be able to go to a park and spend an entire day there,” said Whelan. “I want families to be able to go to the park and not just do one activity. I would like to see many passive activities, [as well as] the tennis courts which have brought so much to the town,”

Ballard noted the deteriorating condition of the park, stating the borough should clean up the area “so that it is not the eyesore it continues to be.”

DuPont also spoke of conserving the natural serenity of the park and retaining “the ability of our residents to go down and contemplate.”

Beth Hanratty asked the candidates about pedestrian safety, which has become an issue in the wake of recent accidents in the borough involving cyclists.

All candidates responded there is a need for more public awareness as well as better signage in the borough.

Other questioners asked for the candidates’ views on Bellhaven Park, preserving the T. Thomas Fortune House, and amending the tax pilot agreement with Meridian Health to increase the amount of taxes the medical center pays to the borough.

During his opening statement DuPont, who is seeking his fourth term on council, noted the lack of civility that has marked this election cycle.

The incumbent councilman detailed his major accomplishments during his third term, including introducing the first municipal budget without a tax increase.

“As a result of my experience as well as being on the finance committee, we had the opportunity to vote and approve, for the first time in Red Bank’s history, a flat budget for municipal taxes,” said DuPont.

His remarks later came under fire from Taylor, who credited Republican first-term Councilwoman Linda Schwabenbauer, a member of the finance committee, for helping to keep the borough tax rate steady.

“In the eight years prior to her being on the finance committee, taxes just kept going up,” said Taylor.

The Republican challengers took swipes at DuPont, bringing up an increase in the borough’s debt service, which Whelan estimated is 20 percent of the budget, during his tenure on the finance committee.

DuPont responded, “The long-term debt has gone down by 20 percent. Our debt payments have gone down almost $460,000.

“If you look at the budgets that we’ve passed during my tenure as chairperson, we always either had a very small increase or we took steps to reduce our operating expenses.”

Another hot button issue was Bellhaven Park, with all agreeing on the need for a park on the borough’s west side, but at odds over the nature of the park.

“There has to be a better solution, a more acceptable solution to the public that doesn’t cost taxpayer money and allows all residents to enjoy Bellhaven,” said Ballard, commenting on a proposal for a spray park feature.

DuPont said the area should meet its original intention as an educational nature preserve.

“I think that area needs to be cleaned up in accordance to what it initially was.”

Taylor also opposed the spray park feature as “economically and ecologically unsound,” but agreed on the need for the park.

“We need to dedicate a space to our west side residents,” Taylor said.

In closing remarks, the candidates highlighted the skills they would bring to the borough.

DuPont also outlined a vision for the future of the downtown.

“My vision of Red Bank includes the realization of dreams, and one of those dreams is Broad Street to the river. I think that it is time now for that realization to occur,” said DuPont.

In their closing remarks, the Republican challengers said the Democratic council majority has grown complacent.

“When someone is in power for 25 straight years, it breeds complacency,” said Whelan about the more than two decades during which Democrats have controlled the Borough Council.

Whelan and Taylor said the borough is not attractive to young families as well as to those that have been there a number of years.

“I want to start a family in Red Bank and I want to buy my first home in Red Bank and I don’t think that [the borough] has done a good job attracting new families or keeping the families that have been here for the past 20 or 30 years,” said Whelan in his opening remarks to packed room.