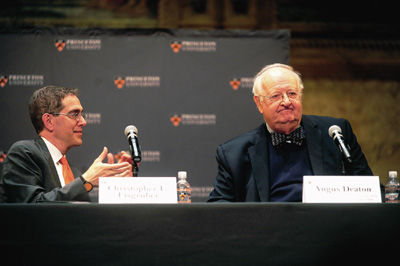 By Lea Kahn, Staff Writer
Angus Deaton, who has taught at Princeton University since 1983, has been awarded the 2015 Nobel Prize Memorial Prize in Economic Sciences — the fourth Princeton professor to win the economics award, starting with Professor Emeritus Daniel Kahneman in 2002.
Mr. Deaton, who was born in Scotland, holds dual British and American citizenship. He is the Dwight D. Eisenhower Professor of International Affairs and a professor of economics and international affairs in Princeton University’s Woodrow Wilson School of Public and International Affairs.
Princeton University President Christopher Eisgruber; Cecelia Rouse, dean of the Woodrow Wilson School of Public and International Affairs; and Janet Currie, who chairs the Department of Economics, praised Mr. Deaton at a press conference Monday afternoon.
A smiling Mr. Deaton entered Richardson Auditorium in Alexander Hall from a side door. The auditorium was filled to capacity with students, faculty and staff who gave him thunderous applause. Wearing his trademark bow tie, a sweater, dark jacket and slacks, he took his place onstage.
President Eisgruber said Mr. Deaton is a leader in the field of economics and has been a mentor to countless students. He added that Mr. Deaton’s book, “The Great Escape: Health, Wealth and the Origins of Inequality” — “which is selling out quite rapidly” — is the best that he has read.
Dean Rouse described Mr. Deaton as empathetic, patient and tough. “He is a wonderful friend, and I couldn’t be more proud,” she said, while Ms. Currie said he was funny, witty, erudite and a very good dinner companion.
Mr. Deaton rose and walked over to the podium. He stood quietly for a moment and then exhaled. He thanked everyone in attendance and added that “you don’t exactly get a lot of preparation for this.” People have been offering congratulations all day, he said, adding that he has been asking himself “why.”
“It has taken a long time for it to sink in, (but) I am slowly getting used to it,” said Mr. Deaton, who won the award for his work in consumption, poverty and welfare.
Mr. Deaton said he learned early Monday morning that he had been awarded the prestigious prize. With a smile, he said he heard a “very Swedish voice” on the other end of the telephone line, who kept assuring him that this was not a prank.
He admitted that he always thought he would be unlikely to win the Nobel Prize, although his name has been on that list. That’s why he was surprised to receive the phone call early Monday morning. He said he thanked the caller 100 times, until he was told to stop offering thanks and in exchange, he was offered thanks for earning the prize.
When Mr. Deaton was asked, during the question-and-answer session that followed, about his future plans, he replied that movie stars that win an Oscar typically get another five years of life. Turning serious, he said he would just like to get back to work.
Asked about the relationship between healthcare and poverty, Mr. Deaton said he is “not a fan” of universal healthcare because it does no good if there is no one at the hospital to care for the sick. He also is not a fan of the idea that “either you get rich and then get healthy, or that you get healthy and then get rich.” There are many other factors, such as clean water and vaccinations, he said.
And asked what worries him most about the future, Mr. Deaton replied that he worries about inequality — its impact on climate change, politics and democracy. He said he worries about a world in which “the rich get to write the rules which the rest of us have to obey.”
Mr. Deaton is the 10th member of the current Princeton faculty – including emeritus – to receive a Nobel Prize.