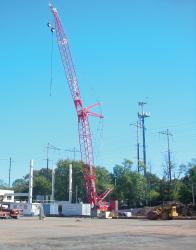 A large crane sits at the Pearl Street construction site, waiting to lift precast concrete pieces into place for the 750-space parking deck being built. PHOTO COURTESY OF GERRY TRABALKA METUCHEN — A surge of activity has come in the wake of the official groundbreaking for Woodmont Properties’ mixeduse project on the Pearl Street parking lot.

“It was a super day,” Mayor Thomas Vahalla said of the Oct. 1 groundbreaking. “It was a great day for Metuchen in that we are moving forward; we see progress, we see things that are going to change yet make Metuchen a better place and help our businesses …”

Vahalla and other borough officials highlighted the progress of the project — which is slated to consist of 273 luxury apartment rentals and 11,500 square feet of retail and restaurant space — at the Oct. 5 Borough Council meeting.

Business Administrator Jennifer Maier said the borough closed on the purchase of the half-acre public piazza, for which it paid the Parking Authority $1.1 million. The funds for the purchase came from a county open space grant that was awarded to Metuchen in 2013. 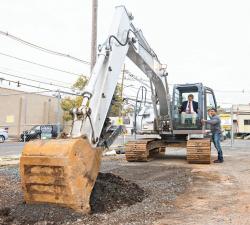 Metuchen Mayor Thomas Vahalla operates a backhoe with guidance from a construction worker during the Oct. 1 groundbreaking at the Pearl Street development site. PHOTO COURTESY OF WOODMONT PROPERTIES While Woodmont will construct the plaza as part of the project, the borough will retain ownership of the public space.

In addition, the American Legion Fugle- Hummer Post 65, whose headquarters was housed on the Pearl Street lot, moved into a newly built post at Calvin and Wernik places. Woodmont constructed the new post for the Legion because the land on which the former headquarters sits is needed as part of the project.

“I haven’t been in the building, but it looks great,” Vahalla said.

Set on one level, the building complies with the requirements of the Americans with Disabilities Act, and is equipped with an all-new kitchen, bar and space for meetings and events.

According to Parking Authority Chairman Len Roseman, a ribbon cutting for the new post is set for Oct. 25.

“The setting is really quite nice,” he said.

Post Commander Walter Zjawin said local Boy Scouts retired the colors at the Pearl Street post on Sept. 28, and the Legion had its first official function at the new headquarters on Oct. 5.

Zjawin added that concerns about traffic in the adjacent lot make the new location less than ideal, but said members are mostly happy with it.

The old American Legion building is set to be demolished within the next month or so, according to Steve Santola, executive vice president and general counsel for Woodmont. Before that can happen, he said, utilities at the building must be shut off.

According to Santola, Woodmont is allowing Nexus Parking — the company constructing a six-level, 750-space parking deck at the site — to finish its portion of the project before beginning construction in earnest on the residences and retail space.

“We’re kind of giving them a clean shot at the site right now,” he said.

Still, Woodmont has been doing site work to prepare for the major construction. Santola said workers have completed Woodmont Drive, which will run between the planned buildings, along with all the infrastructure that runs beneath it.

“So much happens underground … before you get vertical,” Santola said, adding that the next step will be to pour the footings for the west building of the project.

“We expect to be able to move our first residents in in the late part of 2017,” Santola said, adding that Woodmont anticipates the start of leasing the apartments next fall.

While the schedule for the project remains unchanged, a new name for it emerged at the groundbreaking ceremony.

“We just felt that it was important to come up with a name that was a little more representative of the transit-oriented location of the site,” Santola said, adding that developments in proximity to public transit are a hot trend.

During the Oct. 5 meeting, Councilman Jay Muldoon spoke of the progress on the parking deck, saying the delivery of precast concrete components for the structure has begun, and that the onsite crane will be putting those pieces in place for the next few weeks.

Roseman said as many as 20 of the components will be placed each day.

“The residents and the commuters have been very cooperative and patient with what’s gone on,” Muldoon said. “So far, things have gone smoothly …”

Vahalla added that motorists should be careful not to get distracted by the construction at the site as they pass.

“… We’ll see a lot of action, and a lot of things coming out of the ground very quickly,” he said.

According to officials, despite the movement of the large components, New Street will not close during this stage of construction.

“The work is underway, and the deck is rising,” Muldoon said after the meeting.

He added that he recently spoke with a downtown business owner, who marveled over the cleanliness and lack of noise from the large-scale undertaking.

The other large development in the borough — The District at Metuchen, which will include a Whole Foods Market — is moving forward, as well.

The building that housed Boro Ace Hardware was demolished last month, allowing for more work to move forward on the project, being constructed by Renaissance Properties, Muldoon said.

“There’s work going on at that site every day, too,” he said.

Slated for the site is a 43,500-squarefoot building to house Whole Foods, as well as a second, 11,005-square-foot building that will house retail of some kind.

The Whole Foods and its retail neighbor will sit at Middlesex and Central avenues. Two future phases of the project will be constructed at Middlesex, Central and Lake avenues, and at the property north of Middlesex Avenue where Cryan’s once sat, respectively.

Bob McDaid of Renaissance Properties is set to provide information on the project during a Breakfast with the Chamber event from 8-10 a.m. on Oct. 21 at the Old Franklin Schoolhouse, 491 Middlesex Ave. Those who wish to attend must register in advance at metuchenchamber@optimum.net.