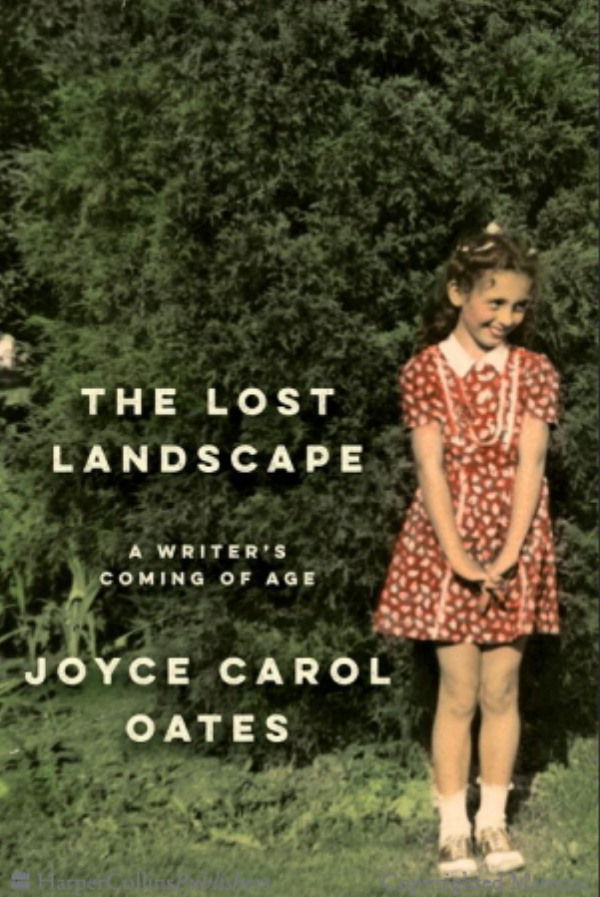 By Anthony Stoeckert
It comes as no surprise that Joyce Carol Oates is often asked to write essays for magazines, from The New York Times Magazine to The New Yorker to AARP Magazine. In these pieces, she has written about her pet chicken, being bullied, her autistic sister and much more.
Those pieces now comprise Ms. Oates’ newest book, The Lost Landscape: A Writer’s Coming of Age (published by Ecco), but the pieces in the book are quite different from their original versions.
”Everything was completely revised,” Ms. Oates says. “For instance, I may have been invited to write something for ‘The New York Times’ about my mother and father… on two different occasions. So when I took the material out and examined it, I rewrote it completely so that it fits in with the memoir. Everything is sort of written for the memoir as an occasion in the book, but everything originally was written for other publications; I rewrote everything.”
Ms. Oates says the process is typical of what writers do. When short stories she has published are compiled for a book, she revises them to create unity. For The Lost Landscape, she says she made adjustments when stories overlapped, and wrote some new shorter pieces to help with transitions.
”It’s a very psychologically and emotionally soothing way to write,” she says, because I would see this manuscript in my study on a shelf, for years I’d walk past it, called ‘The Lost Landscape.’ And I would look at the beginning and see what I had written, and I would think, Some day I’m going to take this up and write it all over. It was sort of a comforting thing.”
Ms. Oates will discuss and sign copies of The Lost Landscape during an appearance at Labyrinth Books in Princeton on Oct. 27.
Ms. Oates grew up in the western New York farming town of Millersport. She began telling stories as a young child, and began writing novels when she got a typewriter at the age of 14. Her first novel, With Shuddering Fall, was published in 1964, and she has published more than 40 novels, as well as several short story collections and works of non-fiction.
Since 1978, Ms. Oates has lived in Princeton and taught at Princeton University. She is the Roger S. Berlind ‘52 Professor of the Humanities, Professor of Creative Writing, Emerita, and continues to teach at Princeton and at New York University. Her 1969 Novel, Them, won the National Book Award. She has also won two O. Henry Awards, and the National Humanities Medal.
In the book’s introduction, Ms. Oates writes that The Lost Landscape is not a complete memoir of her life, but “an accounting” of the ways her life “was shaped in early childhood, adolescence and a little beyond.”
When asked if writing a memoir is easier than a novel, Ms. Oates says it’s a good question, but that she’s not sure how to answer it.
”I think it depends upon the fiction,” she says. “A novel is very difficult to write because a novel takes a lot of planning. A short memoirist piece could be done in an afternoon because you just write about what you actually know. And you’re not supposed to invent anything, so it comes out pretty clearly. Then you may rewrite later to make it a little longer.”
She would, on occasion, write a page, then go back and add details, the process sometimes jogged her memory of certain events.
”You find yourself remembering things that you had ordinarily forgotten,” she says. “And looking at snapshots and photographs is very, very stimulating.”
Joyce Carol Oates will discuss her book, The Lost Landscape: A Writer’s Coming of Age at Labyrinth Books, 122 Nassau St., Princeton, Oct. 27, 6 p.m. For information, go to www.labyrinthbooks.com or call 609-497-1642.