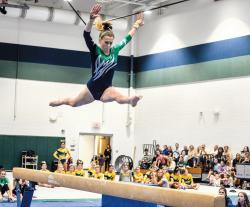 Colts Neck High School’s Sophie Garito is airborne during her balance beam routine at a dual meet against Red Bank Catholic High School Oct. 13 in Colts Neck. RBC edged the Cougars in the duel between undefeated teams. MATT DENTON The clash for the Shore Conference B North Division gymnastics championship lived up to expectations.

The Caseys and Cougars came into the meet as two of the three best teams in the state, and both were undefeated in dual meets.

Colts Neck put up its best point total of the season in the showdown, with Samantha Morrison (37.4) and Triniti Barron (36.925) finishing second and third behind RBC’s Alex Cucich (37.925) among the allaround competitors at the meet.

The event that made the difference was the opener, the vault. RBC jumped out to a lead thanks to Cucich’s 9.525 and teammate Sierra Garcia’s 9.30. The Cougars spotted the Caseys more than a half-point lead that they weren’t able to recover from. They chipped away, especially on the balance beam, with Morrison and Charlotte Haaf battling for first with the same 9.5 mark, but the Caseys held on for the slim victory.

This was the second straight year that RBC (9-0) has handed Colts Neck its only dual-meet loss. There was some consolation for the Cougars, as they are still the public school division winners.

The B North Division battle was just the first round between these two powerhouses. They will go at it again at the Shore Conference Championships Oct. 31 at Brick Memorial High School and at the NJSIAA Central Jersey sectional championships Nov. 7 at Manalapan High School.

In their next meet the Cougars made a strong statement that the dual meet won’t be the final say between the teams. Colts Neck rolled up the state’s highest score of the year, 113.275, in beating Howell High School (102.3) Oct. 15. That score gives the Caseys (112.6) something to think about heading to Brick Memorial.

“I am not really surprised at the scores; all of my all-around gymnasts are returnees, so I knew what to expect this year if they all came into the season healthy,” Cougars head coach Nicole Pandozzi said.

Morrison, Haaf, Sophie Garito and Marissa Lewandowski gave the Cougars remarkable all-around depth heading into the season. The return of Barron, who missed most of last season with an injury, has made the Cougars that much stronger this season.

Another team with tremendous depth that ranks among the very best in the state is Marlboro High School. The Mustangs (10-1) saw their bid for an undefeated season derailed Oct. 13 when they lost by just 0.025 to Freehold High School, 105.175- 105.150.

Nevertheless, Marlboro won the division title outright after sharing it with Freehold and Howell in 2014. Marlboro did not have the injured Jordyn Zieden-Weber for the meet. With Melissa Astarita and depth on every event, Marlboro will be a factor in the upcoming championships.

The Mustangs still have one of the top team scores in the state this year, 110.1.

The surprise win signaled Freehold’s return. An early season injury to all-around standout Arah Godbole cost the Colonials (8-3) a chance to share the title with Marlboro, but she’s back in top form and with Isabella Schaffer coming on strong in the all-around, Freehold is a team to watch.

“The best is yet to come; we still haven’t hit our peak,” said head coach Katie Pusz, whose team has a high score of 106.4.

While Colts Neck and Marlboro are assured two of the six spots available for the team competition at the Shore Conference meet, Freehold, Freehold Township High School and Howell are all vying for a seat at the table. Heading into this week, Freehold Township and Freehold were fifth and sixth, and Howell was on the outside in seventh. The standings could change, as all three teams have the opportunity to improve their scores with dual meets this week.

Thanks to the influx of a large and talented freshman class, Freehold Township (9-3) is back with a high score this year of 108.1.

One of those freshmen, Alexis Rogers, is the top all-arounder. Dani Marino is among the sophomores who count as veterans, who have helped the team produce one of the Shore’s top scores.

It is most likely that all five Freehold Regional High School District teams will qualify for the state sectional in Manalapan.

The Shore Conference meet could be seen as a preview for the state championships. Not only are RBC and Colts Neck among the best in New Jersey, but so is St. John Vianney High School, which has the third best score in the state (111.3). The individual talent, however, is even more impressive.

The Shore Conference has the state’s top two scorers in the all-around in RBC’s Cucich (38.7) and St. John Vianney’s Kristen Politz (38.425).

Politz, a senior who has committed to Penn State University, lives in Morganville.