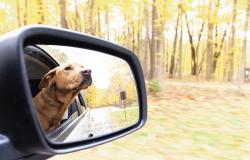 Transporting a pet can be hazardous to one’s driving, especially if Fido or Fifi is not properly restrained Add taking one’s dog along for the ride to the list of potentially dangerous behind-the-wheel distractions faced by today’s drivers.

According to data compiled by the AAA in Orlando, Fla., and pet travel product maker Kurgo, 56 percent of those surveyed said they’ve driven with their dog in the car at least once a month, with over half of them (52 percent) saying they’ve shifted their attention away from the road to attend to their canine companions.

What’s the best way to minimize distractions and help maintain focus while sharing a car’s cabin with a dog? Just like the rest of us, he or she should buckle up, so to speak. “Drivers should use a pet restraint system for your dog every time their pet is in the vehicle,” says the AAA’s Jennifer Huebner-Davidson. “A restraint will not only limit distractions, but also protect you, your pet and other passengers in the event of a crash or sudden stop.”

Pet-care experts universally recommend owners use a restraint system whenever driving with a pet aboard, even if it’s just close to home. And if it’s a road trip involving driving long distances and at highway speeds, finding a good quality dog restraint that’s comfortable and easy to use is especially important.

Unfortunately there currently are no crash-test protocols or performance standards for animal restraints as there are for child seats in the U.S., which means dog owners are more or less at the mercy of manufacturers’ claims for pet protection.

To that end, automaker Subaru recently teamed up with the Center for Pet Safety (CPS) to determine the effectiveness of such restraints and announced the results of their 2015 Crate and Carrier Crashworthiness Studies. They determined the three top models on the market to be the Gunner Kennels G1 Intermediate with 8-foot Tie Down Straps, PetEgo Forma Frame Jet Set Carrier with ISOFIX-Latch Connection and the Sleepypod Mobile Pet Bed with PPRS Handilock.

According to the CPS, it’s critical to choose a product that’s suited to a canine’s size, shape and weight, whether it’s a crate, carrier or harness. Dogs should fit snugly in a crate or carrier, albeit with sufficient room to be able to get comfortable. It’s best to place a carrier or crate on the floor behind the front seat rather than buckling it in with seat belts. And be sure to use weight-rated cargo area anchor straps to hold a crate or carrier in place instead of using wimpy elastic or rubber bungee cords.

The full dog restraint performance report can be found at CenterforPetSafety.org.