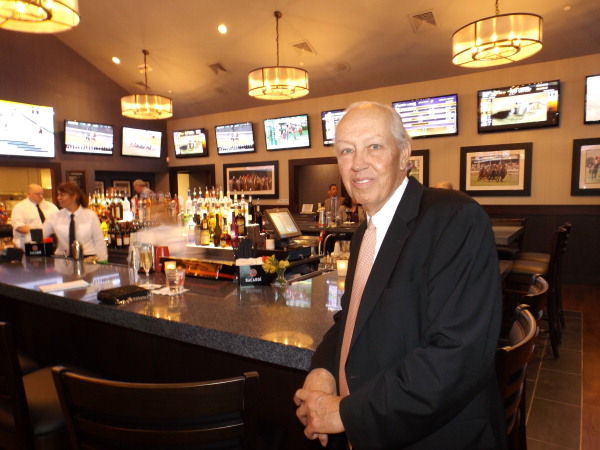 By Gene Robbins, Managing Editor
Robert Kulina feels at home standing in the Favorites restaurant, which officially opens tomorrow, Saturday, as the state’s newest off-track horse wagering site.
The president of Monmouth Racetrack grew up in Hillsborough, on a Sunnymead Road farm on which rental townhouses and apartments have just opened.
His first job was unloading for vendors at the Packer’s Market, the site of which is across Route 206, he said.
His school class spent its freshman year of high school in their Hillsborough elementary school building before it moved to Somerville High, from where he graduated in 1967.
Mr. Kulina said the family had his father’s post-funeral repast at the site, and he had attended many others at the same location.
His mother and father met in the mid-1940s at the nightspot on the site where he stood Thursday, hosting invited guests to his newest venture after at least 20 months in the approval process. The unadvertised “soft opening” continued today, Friday.
As a young teen, Mr. Kulina said he started working with horses with his father, a trainer. He’s been in the racing business all his life, with the last 43 years in the management team at Monmouth Racetrack.
When state laws changed to allow off-track betting at sites to be built away from racetracks, Mr. Kulina immediately thought of Somerset County as a potential site.
He originally looked near the Somerville Circle, where many state roads converge. When nothing could be found, the racetrack broadened the search, eventually settling on Maestro’s restaurant on Route 206 just south of Brown Avenue in northern Hillsborough.
In addition to location, Somerset County has appealing demographics, he said. The population within a short distance is older and more affluent than much of New Jersey — the type of profile to which his type of entertainment might appeal, he said.
Monmouth Racetrack has built an OTW in Woodbridge, but Favorites is less than one-half of the physical size of that site. Part of the reason a smaller facility was feasible was because technology and laws now allow wagering from a computer or even a Smartphone. A bettor doesn’t have to travel physically to enjoy the races, he said.
“Technology has changed how we do it, but at the end of the day we sell bets on horse races,” said Mr. Kulina.
The facility is gleaming new. Far from the stereotype of a betting parlor, Favorites looks and acts like a mid- to upper-class restaurant — with a lot of TVs.
In the whole building there are 144. All the screens were tuned Thursday to one of 12 thoroughbred or trotter racetracks across the country, from Saratoga and Belmont in New York, to Keeneland in Kentucky, to Santa Anita and Golden Gate in California. On Sundays, they’ll be switched to NFL football league games.
“It came out great,” Bill Knauf, vice president of operations, said of Favorites. “We’re excited and the place looks beautiful. It’s been a long process and finally we’re here now. We hope people come out and experience it for themselves.”
At the center of the facility is a bar in a room with seven screens on the long sides, and five TVs on either end. One major TV on each end of the barroom is 80 inches wide; the rest are 42 inches.
A booth seating area has a dozen TVs within easy view.
There are two rooms devoted to the focused bettor. A patron can site at a carrel with a 22-inch TV and a keypad at which the bettor can punch in their account number, wagering information or even summon a food or drink server. A smaller room has 18 smaller TVs facing a wall of 13 televisions each broadcasting from a different track. A larger room has more than 60 carrels, most with betting terminal keypads.
The menu offers traditional hand-held items, like a burger and cole slaw for $8.95, or a grilled cheese for $$7.95. Or a person can choose from entrees, ranging from macaroni and cheese at $14,95, to fish and chips at $16.95 to beef medallions at $24.95.
It’s been a long process in securing approvals, with resistance from a segment of the population frustrated by state law that takes away any review or acceptance process away from the local government.
“I can’t change the public’s perception,” said Mr. Kulina. “All I can ask if for the public to come and experience what we do.” 