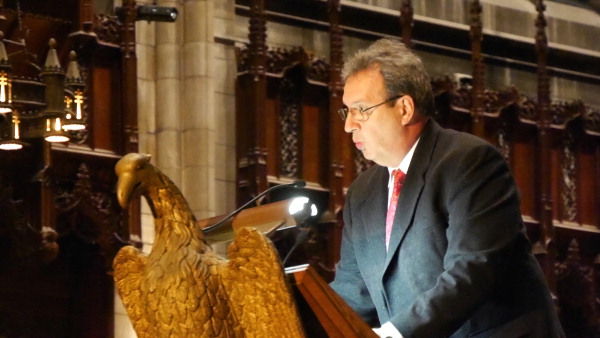 By Philip Sean Curran, Staff Writer
The late Nobel Prize winning mathematician John F. Nash Jr. and his wife, Alicia, were remembered Saturday for the life they shared amid the ups and downs that came with his bout with schizophrenia and subsequent celebrity as the focus of a Hollywood movie.
Some 300 family, friends and colleagues gathered inside the Princeton University Chapel for an evening memorial, the denouement of a day of events devoted to recalling Mr. Nash’s life and work. The roughly one-hour service included the music of Bach, the words of Psalm 23 and the thoughts of those who knew the Nashes.
Inside the house of worship, one of Mr. Nash’s sons, John David Stier, and others shared reflections about the couple, who were killed when the taxi they were traveling in was involved in an accident on the New Jersey Turnpike on May 23.
They had been returning from Newark Liberty International Airport after a trip to Norway where Mr. Nash was a co-recipient of that country’s Abel Prize for math. He was 86, she was 82.
Retired New York University math professor Louis Nirenberg, the other recipient of that award, recalled how he and the Nashes had flown back to the United States together and that their original flight had been cancelled forcing them to take a different plane.
With no one waiting for them at the Airport, they talked for a time, until the Nashes took a taxi to return to their home in Princeton Junction. Mr. Nirenberg said the couple are in his thoughts “very often.”
“And sometime, I can’t believe that they’re not alive,” he said.
The tragedy on a highway in New Jersey ended a relationship that had its foundation in one of the country’s most celebrated hall of learning in Cambridge, Massachusetts.
Mr. and Mrs. Nash had met at the Massachusetts Institute of Technology, where she was physics major and he a young professor in the 1950s. In some ways, they were perfectly matched: he reserved, she outgoing.
Their subsequent marriage was marred by Mr. Nash’s descent into mental illness. Yet David A. Smith, president of the MIT Club of Princeton, spoke of Mrs. Nash’s “tenacious strength and courage.”
“Alicia and John served as an inspiration to many,” he said. “Alicia’s advocacy for the mentally ill is well known.”
Mr. Nash’s life was chronicled by his biographer, Sylvia Nasar, who delivered a lecture earlier in the day about him and then attended the memorial. Her book, “A Beautiful Mind,” was turned into a movie starring Russell Crowe — casting the bright lights of Hollywood on an otherwise private man who once had lived in the shadows of society.
Mr. Stier said it was “plain to see” why his father had chosen Princeton University and the surrounding community to be his home.
“Here was the place where he was always accepted, never criticized. He was allowed to be himself,” the son said of his father.
The couple was “beloved members of the Princeton University community,” university President Christopher L. Eisgruber wrote in a letter that university vice president and secretary Robert K. Durkee read on his behalf.
“The world felt a personal connection to John and Alicia Nash,” Mr. Eisgruber said in the letter.