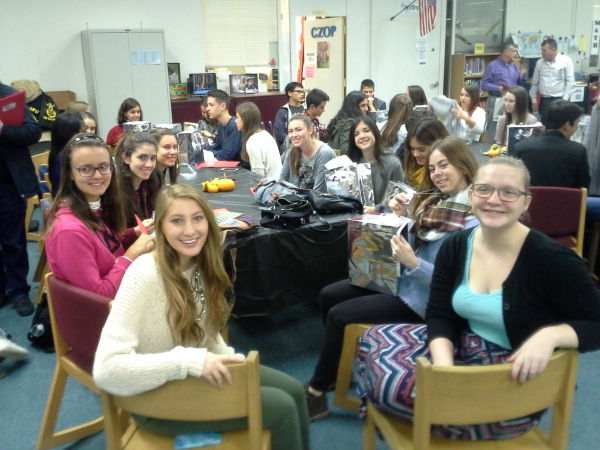 By Frank Mustac, Special Writer
HOPEWELL TOWNSHIP — It seems like October is foreign-exchange-student month at Hopewell Valley Central High School, with high schoolers from France just departing, ones from Germany here for about a week and a group of 20 from Spain just arriving.
The Spaniards donned the role of guests of honor at a welcome breakfast hosted by Spanish-language students at Hopewell Valley, their teachers and school administrators inside the high school’s media center early Monday morning.
Lexi Rubin and Blair Shields, both seniors taking Advanced Placement Spanish at Hopewell Valley, talked about their experiences so far with the students from Murcia, Spain, who will be staying in the United States for about two weeks.
“It’s really fun,” Blair said, describing meeting people from the Iberian Peninsula as well getting to know schoolmates at Hopewell Valley also involved in the exchange program she didn’t know before.
Lexi said she is “so excited right now.”
“I think we’re going to learn a lot of Spanish and we’re also going to make a lot of lifelong friendships. It’s going to awesome,” she said. She said she and Maria Carrillo, a student from Spain staying with her at her family’s home during the exchange program, have already “bonded.”
Jose Luis, one of the students from Spain, said he is “looking forward to meeting new people, different from us,” and experiencing “American culture.”
Having studied British English in school back home, he said he noticed that “American English is very different — a lot faster.”
Hopewell Valley world language teachers Kristen Kincaid and Raquel Rivera are the volunteer coordinators for the Spanish student exchange program.
This year’s exchange is a special one, Ms. Rivera said, because it marks a 10th anniversary for the program with the Floridablanca school in Murcia, Spain. Also, it’s the first time Floridablanca’s principal, Fernando Urena Villanueva, accompanied his students to Hopewell Valley.
Mr. Villanueva and teacher Alfonso Pagan Pedreno, who is also here from Spain, will be retiring this year.
The exchange program, Ms Rivera said, will hopefully continue with the assistance of Floridablanca teacher Pedro Sanchez Diaz, who is also here on the trip.
During their time at Hopewell Valley, the students from Spain will attend classes with their American host students, but they also have planned excursions to New York City and Washington, D.C.
In April, the Spaniards will host students from Hopewell Valley for a two-week stay in Murcia — the seventh largest city in Spain with a population of more than 400,000. It’s about 350 miles southeast of Barcelona. 