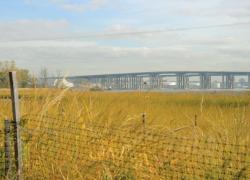 The site of the future Woodbridge Waterfront Park has undergone extensive cleanup efforts to bring it from a former industrial site to a natural playground. PHOTO COURTESY OF JOHN HAGERTY A once-contaminated site will again become a natural attraction for the community to enjoy.

Years in the making, the start of construction of Woodbridge Waterfront Park — a 100-acre parcel of wetlands along the Raritan River waterfront at the Keasbey Redevelopment Zone — marked the next step in transforming the site.

“It’s going to be phenomenal,” Mayor John McCormac said after the Oct. 27 announcement at the site. “It’s amazing what we’ve accomplished there.”

Formerly home to chemical manufacturers — Nuodex Inc., until its closing in 1984, and then EPEC Polymers, which acquired it in 1991 — the site has been undergoing remedial investigation and cleanup since the 1990s.

In 2009, the N.J. Department of Environmental Protection (DEP) designated the site as a Brownfields Development Area (BDA). “Getting that designation … was crucial, because [the DEP] then oversaw the cleanup of the site,” said John Hagerty, a spokesman for the township.

In addition, the BDA designation allowed for the property to become the Keasbey Redevelopment Zone, because it met criteria to be deemed in need of redevelopment.

Remediation at the site — a good portion of which has been completed — includes restoration of the natural wetlands habitat and the planting of more than 2 million native plants, which will transform the site into a diverse, functioning ecosystem of tidal and freshwater wetlands, along with enhanced upland areas, officials said.

Other ecological restoration underway includes the creation of a 6-acre lined pond, along with the enhancement of about 30 more acres of upland areas.

Hagerty said ospreys and a bald eagle are already making their home there.

And once the approximately 30-acre park is completed in 2016, members of the public will be able to observe the birds and other wildlife at bird blinds.

In addition, the park will be home to over 7,000 feet of walking trails encircling the restored wetlands; 800 feet of boardwalk overlooking wetland areas; a viewing platform at the Raritan River; interpretive educational signs; gathering spaces with seating; and bus parking for school groups and other trips.

“It’s going to be really cool when it’s done,” he added.

The Woodbridge Waterfront Park will allow direct public access to the Raritan River from Woodbridge — something that has not happened since before the turn of the century, officials said. The access will allow for canoeing, kayaking and fishing at the site.

Calling it the largest environmental restoration project undertaken along the Raritan in Woodbridge, McCormac voiced excitement about the project.

“It’s ultimately going to go down as one of the coolest things that has happened in this town in 50 years,” he said.

“What’s really cool about it is that it’s a clean-energy … power plant,” Hagerty said, adding that it’s slated to generate enough energy to power to about 700,000 homes. “It’s 99 percent completed at this point in time.”

The energy center is employing between 400 and 500 workers for its construction and, once operational, will employ 50 to 60 people, officials said.

The township struck a payment-in-lieuof taxes (PILOT) agreement with CPV, which will have the power plant owners paying Woodbridge $2.5 million in its first year of operation, and close to $5.5 million by its 30th year in business.

Also in the redevelopment area will be the FedEx Ground Transportation Terminal & Warehouse, Wakefern Food Corporation and Graydell.

Hagerty explained that a separate road and an uplands buffer will delineate the natural park area from the companies setting up shop nearby.

“[The mayor] was able to structure what we call a marriage of the two,” he said.