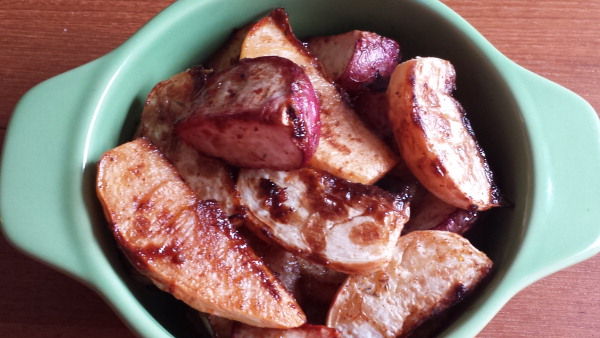 By Faith Bahadurian
Swedes and neeps. These members of the genus brassica seem to figure into every British childhood — but often as dreaded foods, because no child ever craved rutabagas and turnips, right? And it’s true, turnips, especially, can be grayish and bitter when not carefully prepared or seasoned.
Etymologically speaking, it’s not so easy to determine which is which either, because depending on where you are, the references and meanings can be switched. Most sources, however, agree that rutabagas amount to a yellow turnip, and got their nickname because they were regarded as Swedish turnips. Rutabagas may originally have been a cross between the cabbage and the turnip. They can be watery, so a potato (or the breadcrumbs you’ll see in the recipe below) is sometimes added to a mash to firm it up a little.
In Scotland, neeps — or turnips — are traditionally mashed and eaten with haggis on Jan. 25, Burns Night. I see them in lots of recipes lately, especially the sweeter Japanese hakurei variety. Turnips roast up beautifully, and I recently spied, in a Facebook photo, a dish of roasted butternut squash, radish, and turnips prepared for a home dinner by Will Mooney of Brothers Moon restaurant in Hopewell.
I have seen rutabagas already prepped in bags in markets, although they’re easy enough to peel and cut up. Turnips, however, will discolor and develop off flavors if cut surfaces are exposed to the air for too long before cooking.
It wasn’t easy to choose which recipes to include here. A “New York Times Cookbook” gratin of turnips and savoy cabbage cooked in bacon fat with a topping of Gruyere and bread crumbs, sounded delicious, but a bit too rich for Thanksgiving dinner. There was rutabaga purée with cardamom and thyme from “The Bon Appetit Fast Easy Fresh Cookbook,” and other purées and mashes in my cookbooks added ginger and/or lemon. Rutabagas mashed with a potato and lots of scallions in “Canal House Cooking Vol. No. 2” also sounded delicious, in part because it advises us to add “as much butter as your conscience will allow.” In the end, I chose two somewhat more involved, but still fairly simple, preparations.
Roasted Parsnips, Turnips, and
Rutabagas with Ancho-Spiced Honey Glaze
Adapted from bonappetit.com, a Molly Stevens recipe. 6 servings.<br>    I didn’t have parsnips, but did have two scarlet turnips, which don’t need to be peeled, so their pretty skin added color to the dish. Winter squash would also work well here. — F.B.
2 tablespoons butter, melted, divided
2 tablespoons honey
1½ tablespoons fresh lemon juice
1 garlic clove, minced
1 teaspoon chopped fresh thyme
½ teaspoon ancho chile powder
½ teaspoon ground cumin
1/8 teaspoon ground cinnamon
Pinch of cayenne pepper
12 ounces parsnips, peeled, thin ends halved lengthwise, thick ends quartered lengthwise, cut crosswise into 2-inch pieces
12 ounces turnips, peeled, cut into 1-inch wedges
12 ounces rutabaga, trimmed, peeled, cut into ¾- to 1-inch wedges
1½ tablespoons extra-virgin olive oil
Coarse kosher salt
Blend ½ tablespoon melted butter, honey, lemon juice, garlic, thyme, ground chiles, cumin, cinnamon, and pinch of cayenne pepper in a small bowl. Salt to taste, and let stand at least 45 minutes (up to 2 hours) to allow flavors to blend.
Preheat oven to 400 degrees. Line a large, rimmed baking sheet with parchment paper. Spread vegetables evenly on paper. Drizzle remaining 1½ tablespoons melted butter and olive oil over; sprinkle with salt and pepper and toss to coat. Roast until vegetables are soft and browned in spots, tossing occasionally, about 50 minutes. Pour glaze over vegetables; toss to coat evenly. Roast until glaze is absorbed and vegetables are browned, tossing occasionally, about 15 minutes longer. Serve warm.
Lanttulaatikko
(Finnish Rutabaga Casserole)
Adapted from Time-Life “Foods of the World: Scandinavia,” Time Inc. (1968). 8 servings.<br>    Everything old is new again. I see a nearly identical recipe in Mark Bittman’s “The Best Recipes in the World,” but with double the cream. At least Mr. Bittman allows you to substitute half-and-half or milk, and he does cut down on the butter. In any case, ¼ cup of cream between 8 servings is not a lot. — F.B.
2 medium rutabagas, peeled and diced into ¼-inch pieces (8 cups, okay to sub turnips)
1 teaspoon salt
¼ cup dry bread crumbs
¼ cup heavy cream
½ teaspoon nutmeg
1 teaspoon salt
2 eggs, lightly beaten
2 teaspoons soft butter
2 tablespoons butter, cut into tiny bits
Preheat oven to 350 degrees. Simmer diced rutabagas with 1 teaspoon salt in water to just cover, for 15 to 20 minutes until tender (use a sharp knife tip to test).
Drain and place rutabagas in a sieve over a small bowl. Force them through the sieve by rubbing with the back of a wooden spoon (or use a food processor or food mill). In another bowl, soak breadcrumbs in cream for a few minutes. Stir in nutmeg, the other teaspoon salt, and lightly beaten eggs. Add puréed rutabagas and mix thoroughly.
Spread a 2- to 2 ½-quart baking dish with the soft butter. Transfer rutabaga mixture to dish and dot top with bits of butter and bake uncovered for 1 hour or until top is lightly browned. Serve hot; this is delicious with ham.
Faith Bahadurian blogs at http://njspice.net (also Twitter @njspice). On Dec. 2, 7 p.m., she’s hosting Crazy For Cookbooks, a panel discussion at the Princeton Public Library with area chefs, food writers, and cookbook authors/publishers.