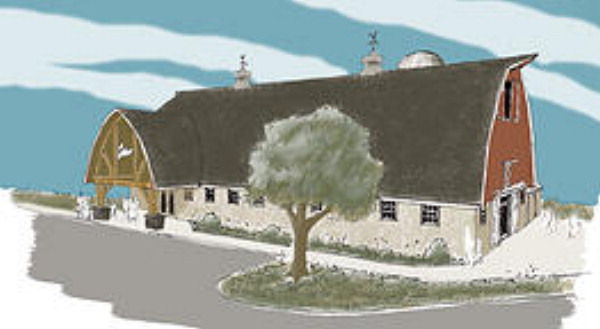 By Gene Robbins, Managing Editor
Christian Community Chapel was denied zoning approval Wednesday, Nov. 4, to locate its church in a farm barn on South Branch Road.
The church fell one vote short in receiving four of seven votes from the board.
The church hoped to locate both the church and the pastor’s house on the 14.3-acre property, using other outbuildings for programs and/or storage.
The barn was envisioned to be converted into the sanctuary, with services in the restored second-floor loft. Concerns over safety of a wooden structure, with an open first-floor fellowship hall below the sanctuary, were among the reasons Board of Adjustment members voted no.
“While the applicant was very accommodating in the end, agreeing to the fire marshal’s requirements and limits on what was compared to a ‘banquet facility’ for 150 people, the applicant still couldn’t change the fact that the second floor loft in this old, wooden barn could be a potential death trap,” said Chairwoman Helen Haines in an email Saturday.
The chapel agreed to Fire Marshall Christopher Weniger’s requests that the driveway be widened to accommodate a fire lane, and provide room in the parking lot and near the barn to demonstrate that a fire truck could move close to the building.
A sprinkler system would have been required. The church agreed to a 30,000-gallon underground fiberglass water tank as a way to mitigate concerns over bringing water to the site with an involved shuttling system requiring a fire truck to pump water through hoses up 600 to 800 feet of driveway.
Pastor Steve Nash said Tuesday he was disappointed in the decision. He said he believed laws urge the committee to “bend over backwards” to accommodate a church as much as possible.
The pastor wouldn’t comment on the church’s next step, only to say they “have a plan”
“God has a way for us,” he said. “It will be determined in time to come.”
Meanwhile, the church appears to be in a bit of a bind. Pastor Nash wouldn’t comment on the status of a real estate contract for the South Branch Road property, but the church is temporarily meeting at St. Mary Byzantine Catholic Church, 1900 Brooks Blvd. after selling its Route 206 church to the St. Mary & St. Athanasius Coptic Orthodox Church this summer.
The Coptics granted the pastor and family the right to stay in the house on that property for six months, but “my wife and I will soon be without a place to live,” the pastor said.
This summer, the church trumpeted its imminent purchase of the farm, even posting a video tour of the property, narrated by the pastor, on its website. Today, the website says the church is transitioning,” with several photos of the barn and farm.
The church applied to the Board of Adjustment for relief from portions of the zoning ordinance without supplying a detailed site plan. That would have come later in what is known as a “bifurcated” application, the pastor said, but it appeared the board wanted all the details now.
He compared the process to when the church sought approval to build its church on Route 206. Then, it was “what can we do to help?” the pastor said. The church and development of the property won awards, he said.
According to the website, in August of 2000, Pastor Steve and Pam Nash and seven other couples held a meeting to discuss the formation of a new church congregation. A letter was drafted about the formation of this new fellowship and to invite others to join.
The first Sunday morning praise and worship service was held at the Somerset Marriott on Aug. 27, 2000. The service was attended by about 300 adults and children.
In 2010, Christian Community Chapel voted to join the Wesleyan Church denomination. Today, the website says Christian Community Chapel celebrates the title of “The most diverse Wesleyan church in North America.”