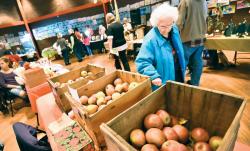 The festival was held from noon to 4 p.m. at the Old Bridge Civic Center on Nov. 8.

The excitement began when members of the historical society crew started peeling apples at the Thomas Warne Museum on Nov. 5.

The apples are donated each year by the Hauser Hill Farm, a fourth-generation apple farm located on Ticetown Road in Old Bridge.

Patricia Schuck, chairperson of the 50th Apple Festival, said the festival is a fundraiser for the historical society.

When she became chair of the historical society, she said, she started holding work sessions on making apple pies.

“Over the years, the festival had lost the reason why we had held it,” she said.

This year, the band of volunteers peeled apples and made more than 50 apple pies to be sold during the festival.

The festival also featured a DJ and a wide variety of vendors and crafters selling items ranging from holiday ornaments to attic treasures. There were also Civil War re-enactors and items from that era on display.

Local Boy Scouts participated in a flag raising ceremony before the festival began. The festival’s annual poster contest garnered over 400 responses from students from Kindergarten to fifth-grade.

Each first- to third-place poster received a plaque and prize in each grade level.

The Thomas Warne Museum’s namesake is one of the 24 original proprietors of “East Jersey” or the Raritan Bay Area.

“He wasn’t one of your absentee landlords … he lived on the land,” said Shuck.

For nearly half a century the Thomas Warne Museum has been a vital historical site and a source of education and information from the earliest days of the area’s history.

In 1820, the museum was a one-room schoolhouse named “Cedar Grove” and served the town for 127 years.

One of the items the museum has is a replica of the historic Cottrell Farm, an apple orchard in Old Bridge Township that dated back to 1831 as well as bottles of Cottrell family’s “Browntown Apple Brandy” which has since been sold to the Laird & Company.

The Madison Township Historical Society’s mission is the acquisition and preservation of area history and the education of area students.