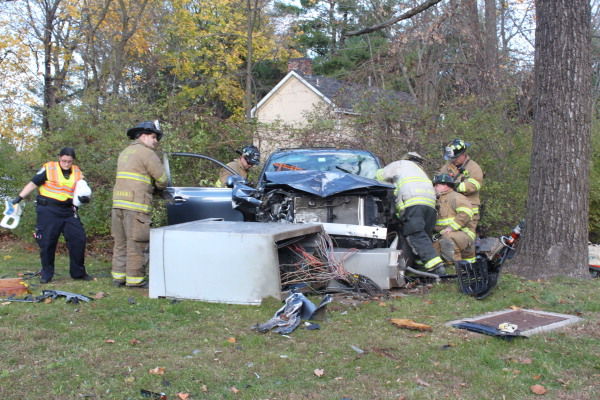 By Lea Kahn, Staff Writer
LAWRENCE – A 56-year-old East Windsor Township woman was trapped in her car and had to be freed after it slammed into the rear of another vehicle that had stopped for the traffic light at Route 206 and Province Line Road shortly after 1 p.m. Nov. 13, according to the Lawrence Township Police Department.
The woman, who was driving a Toyota Highlander, was traveling south on Route 206 when she failed to stop and struck the rear of a Jeep Liberty driven by a 38-year-old Lawrence Township woman, said police Lt. Joseph Amodio. The Jeep was also traveling south.
After hitting the Jeep Liberty, the driver of the Toyota Highlander veered to the right and struck a post, a tree and the control panel for the traffic light, knocking out power to the traffic light, Lt. Amodio said. The force of the impact pushed the Jeep Liberty through the intersection, where it came to rest.
The driver of the Toyota Highlander was conscious and alert, Lt. Amodio said. The airbag had deployed. Rescuers had to cut away the driver’s side door to extricate the woman, who was taken to Capital Health Regional Medical Center in Trenton.
The Mercer County Prosecutor’s Office’s Serious Collision Response Team was called in to help investigate the accident. No summonses have been issued, because the accident is still under investigation.