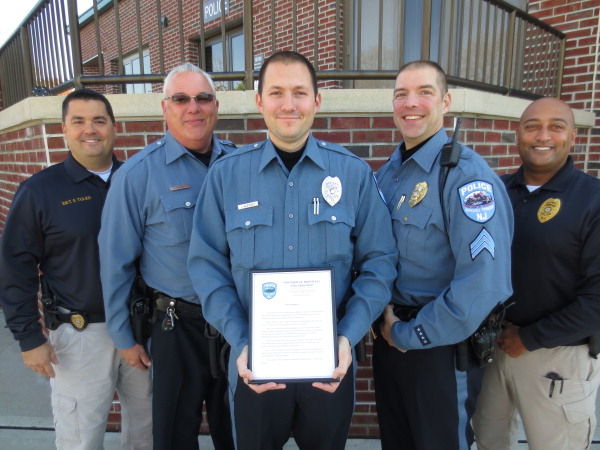 Members of the police department, fellow township employees and Mayor Harvey Lester were on hand as Officer James Klesney was presented the Hopewell Township Police Department’s “Life Saving Award” by Chief Lance Maloney on Friday, Nov. 13.
On Nov. 8 at about 8:33 p.m., Officer Klesney was dispatched to a private residence on a report of a medical emergency — an unresponsive man not breathing — symptomatic of an opiate overdose.
Officer Klesney found an 18-year-old man unconscious with a weak pulse and shallow respirations.
After seeing the victim and speaking with a witness, Officer Klesney administered a dose of Narcan to the victim, who had been in respiratory distress due to an opiate overdose. Officer Klesney then provided rescue breathing to the victim until paramedics arrived.
After another dose of Narcan was administered by paramedics, the victim was transported by members of the Pennington First Aid Squad to an area hospital, where he received additional medical care.
Officer Klesney’s quick actions and the rendering of first aid gave lifesaving assistance to this victim until he could be given to the care of more advanced medical personnel. 