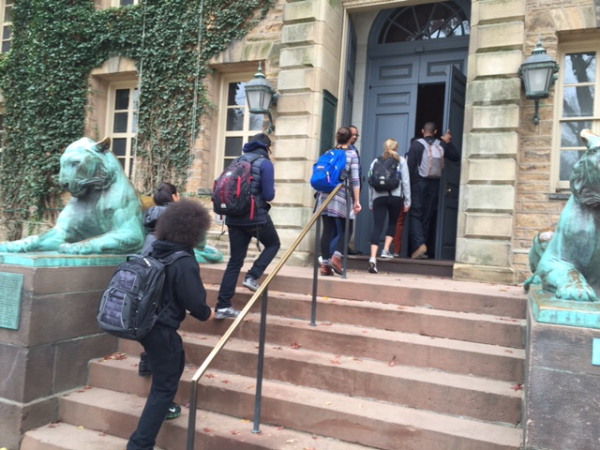 By Philip Sean Curran, Staff Writer
On a day of campus protests nationally, Princeton University students walked out of classes Wednesday and staged a sit-in at school President Christopher L. Eisgruber’s Nassau Hall to demand that Woodrow Wilson’s name be removed from campus buildings and the public policy school.
The student group, the Black Justice League, presented Mr. Eisgruber a list of demands that also included cultural competency training for staff and faculty and a dedicated space on campus for black students. The group said Mr. Wilson left behind a “racist legacy” at Princeton, the school he was president of before becoming New Jersey governor and President of the United States.
Students said their demonstration would go on “indefinitely” until Mr. Eisgruber signed a document containing their demands.
“We’re not negotiating,” said junior Asanni York.
Mr. Eisgruber and Princeton dean of the college Jill Dolan met with students for about 90 minutes, but he refused to sign.
University spokesman Martin A. Mbugua said inside Nassau Hall that Mr. Eisgruber was having a “private conversation” with students and that media were not allowed inside his office to observe.
The university Press Club, a student group for journalists, was posting live blog posts of the protest and the students’ encounter with Mr. Eisgruber.
But it was not immediately known if students would try to remain in the building past closing and risk getting arrested. During the day, professors were bringing in pizza for the students.
The university has met some of the earlier demands of the student group, including making African-American studies a major, rather than just a minor, said junior Destiny Crockett.
On Wednesday, the school also announced that the title of the leaders of the six residential colleges had been changed from “master” to “head of the college.” The change took effect immediately, Princeton said.
“The new title better describes their roles, and it does away with antiquated terminology that discomfited some students, faculty, and the heads of college themselves,” Mr. Eisgruber said in a statement