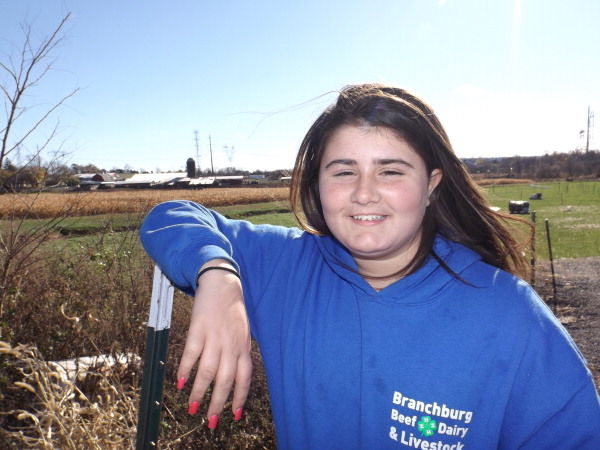 By Gene Robbins, Managing Editor
Megan Norz figured she might have an inside track being a contestant on a new food show featuring kids whipping up dishes in a kitchen under the glare of TV lights and the scrutiny of famous judges.
The Hillsborough 12-year-old promoted herself as a farm gal when she applied to be a contestant on the Food Network show, “Chopped Junior,” which premiered Oct. 27.
“We know the food, because we grow the food,” said Megan, in touting her background.
Megan is the youngest generation in a century-long line of Norzes in the South Branch valley. Her family owns 84 acres, but farms more than 1,000, most of which is leased or rented, says mom Debbie Norz.
Typical of farm families, Megan is called upon to do more and more emerging chores. She’s one of the mainstays behind the cash register in the meat and vegetable stands on the farm, goes on the road to farm markets and ventures into the fields to harvest sweet corn and tomatoes when needed.
“She knows the products so she can talk honestly about them — when they are picked and the like,” said Mr. Norz.
“Chopped Junior” showcases the talents of girls and boys ages 9 to 15. They are challenged to make unforgettable meals from mystery ingredients under a ticking clock in the Chopped kitchen.
Kids bring their energy, personalities and originality to the kitchen, but only one can be crowned Chopped Junior Champion and win the $10,000 prize.
The young cooks are judged throughout the season by a rotating panel of recurring Chopped judges. ,
In Megan’s episode, which will air Tuesday, Dec. 8, at 8 p.m., she’ll be one of the four “culinary elves” getting into the spirit of the season. Her show’s judges are former White House chef Sam Kass, Food Network’s Marc Murphy and culture maven Martha Stewart. Host of the show is Ted Allen.
In the appetizer round, the walls of gingerbread houses come down. For the entrée, the young cooks must make sweet ingredients with a leg of lamb. Finally, everybody is happy to see snowmen made of doughnuts in the dessert basket.
Her competitors are Noelle Smith (of Fairview, Pa.), Noah Jenkins (Rochester, N.Y.) and Aidan Friedson (Bronx, N.Y.). They each get featured in a 30-second bio-pic introducing themselves at the beginning of the show.
Megan found out the show through the 4-H organization, where she’s a member of four different clubs. In July, she made a video of her cooking a favorite food, which turned out to be pasta nest, steak and cheesy cauliflower.
Of course, she picked all the vegetables, and even the steak.
Her show was taped in August, but she has been barred from talking about it. (She had to keep it a secret even from brother Alex and sister Susie, but she’s allowed to mention it on social media next week.) Filmed in the Chelsea Market in New York City, she and her competitors were presented with a basket of items and challenged to spend 20 to 30 minutes making an appetizer, dinner and a dessert. After both the appetizer and entrée courses, one of the four were eliminated, after hearing the judges’ criticisms and comments. The winner is judged on all three courses, Megan said.
Megan said her affinity for cooking the food she produces was spurred by a neighbor, Hilga Hill, who invited kids to come swim in her pool. She brought Megan into the kitchen to make homemade pasta.
“I was 8, and she inspired me to get into cooking,” Megan said.
Until Dec. 8, Megan keeps a wry smile as she rings up meat and egg sales in the stand at the farm. The previous night, she was called upon to make supper for the family. She made sausage with honey, with pasta. 