Skip to content
Many motorists think their cars’ MPG ratings are inaccurate, but they may only have themselves to blame
By Jim Gorzelany
CTW Features 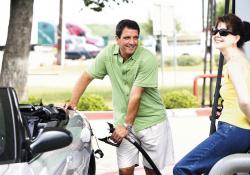 Most every new-car ad that notes a vehicle’s estimated fuel economy bears a variation of the phrase, “your mileage may vary,” which has become a modern-day catchall expression for verbal waffling. Indeed, according to a recent survey conducted by AAA in Orlando, Fla., one-third of all Americans believe their vehicles’ fuel economy ratings are inaccurate as far as “real world” driving is concerned.

But who’s to blame for the discrepancies? Are the automakers at fault for over-expressing their models’ mileage (as has been the case in recent years with some Hyundai/Kia and Ford vehicles), or does the problem lie with the motorists themselves?

“For years, we’ve heard that drivers question whether the fuel economy rating for their vehicle is accurate,” says John Nielsen, AAA’s managing director for automotive engineering and repair. “In the interest of our members, AAA aimed to address this issue with a multi-phase testing series designed to uncover the real reasons behind fuel economy variations.”

To that end, the AAA conducted an analysis of 37,000 vehicle records collected on the EPA’s FuelEconomy. gov website, including models that were often reported as failing to achieve the stated mileage ratings. Among them, AAA selected three models, a 2014 full-size pickup truck, a 2014 large sedan and a 2012 medium sedan — for further testing. Perhaps surprisingly, the research found that all three models’ measured fuel economy was dead-on with the EPA’s estimates, and that drivers’ behaviors and environmental conditions, rather than any inherent vehicle shortcomings, were likely responsible for the reported variances.

“If you drive aggressively, with heavy acceleration, hard braking and driving at higher speeds, your fuel economy is going to suffer,” Nielsen says. “Driving just 5 miles per hour above 50 is like paying an additional 19 cents per gallon for gasoline.”

The bottom line, then, is the same as it ever was — drive prudently in order to maximize the mileage your car or truck was engineered to obtain. Sudden stops, jackrabbit starts and driving at excessive speeds can drain your car’s fuel tank at an excessive rate.

According to a report issued by the University of Michigan’s Transportation Research Institute, aggressive driving combined with improper auto maintenance and poor route selection can reduce a car’s fuel economy by as much as 45 percent. By that measure, a compact sedan that’s EPA-rated at 30 mpg could wind up getting a full-size SUV-like 17 mpg.

Thus, be sure to keep your vehicle in tune and in good working order, with the proper air pressure in each tire to help maximize your car’s mileage. And try to consolidate multiple errands into one trip; several short trips taken on different days, each from a cold start, can use twice as much fuel as a longer multipurpose trip covering the same distance when the engine is already warmed up.

Otherwise, engage the cruise control on the highway to maintain a constant speed and, in turn, help save gas. Switch off your car’s engine while waiting at a curb or sitting at a train crossing; this can conserve more than half a gallon of fuel for every hour that would have been spent idling, when a vehicle effectively gets zero mpg.

Removing a car or truck’s roof rack will improve its aerodynamics and, in turn, its fuel economy by about five percent. At highway speeds, more than half of the engine power goes to overcoming drag, so keep a vehicle’s windows closed to maintain optimal aerodynamics and prevent a 10 percent loss in fuel economy; open the vents to bring in outside air, but use the air conditioning sparingly as it consumes more gas. And don’t treat a car as a rolling storage locker; carrying an additional 100 pounds of weight increases a vehicle’s energy consumption by one to two percent.