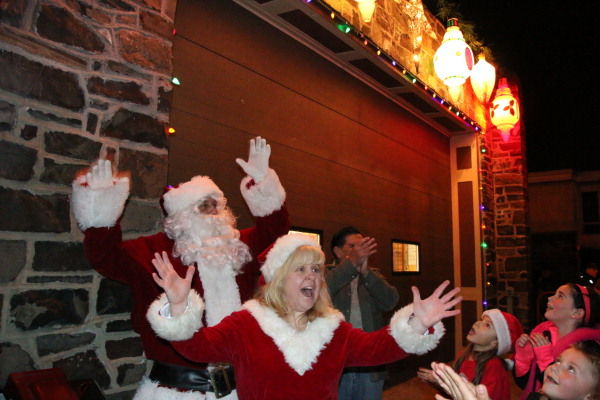 By Amy Batista, Special Writer
HIGHSTOWN – Santa arrived and made his way through the borough on top of the fire truck to kick off the holiday season Nov. 25.
“The Santa Parade is done as a way to say thank you to our community for its support throughout the year,” said organizer Helen Havens, president of the Ladies Auxiliary of Hightstown Engine Co. No. 1 in an email on Dec. 1
The annual Christmas Lighting Ceremony and Santa Parade sponsored by the Ladies Auxiliary of Hightstown Engine Co. No. 1 was held Nov. 27.
Ms. Havens said the auxiliary has been sponsoring the parade for 35 years or more.
The parade began at Leshin Lane and traveled down South Main Street through the center of town where it finished in front of the firehouse.
The lineup of marchers included the Hightstown High School Marching Band, Hightstown First Aid Squad, East Windsor Volunteer Fire Co. No. 1, East Windsor Volunteer Fire Co. No. 2, East Windsor Rescue Squad District 1, Cranbury Volunteer Fire Company, Roosevelt Volunteer Fire Company and Red Knights International Firefighters Motorcycle Club.
Ms. Havens noted how every instrument had Christmas lights. “It looked really cool,” she said.
Santa and Mrs. Claus climbed off the ladder truck and made their way through the crowds of people gathered toward the front of the firehouse to the switch where they counted down and flipped on the holiday lights for the downtown area.
Approximately 100 children sat on Santa’s lap and were accompanied by their parents, grandparents and friends. It was estimated that around 200 people were in attendance, according to officials.
“We had nine auxiliary members helping and five volunteers, our family and friends,” said Ms. Havens, adding that members of Hightstown Engine Co. No. 1 also assisted them.
Everyone was welcomed into the firehouse where the children were invited to visit with Santa and have their picture taken, see the train set by Firefighter Richard Mastriano, enjoy refreshments, get an ornament personalized and more.
“Each child was given a personalized clay ornament with their name and the year on it,” she said. “They were able to choose from Santas, snowmen, angels, gingerbread houses, boots and a variety of others.”
Wawa of East Windsor and Wal-Mart of East Windsor supported the event, according to Ms. Havens.
For her, the highlight was when Santa first entered into the engine room and the whole place erupted in cheers.
“It gave me chills,” she said. “The faces of the children are unforgettable whether they liked Santa or not.”
Hillary Appio-Hamnett, of Millstone, said her family tries to go every year to see Santa in Hightstown.
“We use to go all the time when we lived in Hightstown,” she said. “My favorite part is seeing Santa on the fire truck.”
She said that her younger daughter Katelyn, 4, loves seeing Santa riding in the fire truck.
Miriam Patino, of East Windsor, said that her family has been coming to the parade for many years.
“My son Ricky is 21 now and my other son Johnanthony he is 17, he goes to the parade and his favorite part is the Christmas ornaments,” she said. “It’s like a tradition that we do.”
Victoria Patino, 9, of East Windsor said her favorite part is watching Santa waving at everyone as he comes down Main Street on the fire truck and when Santa turns the lights on.
“It makes me feel that Christmas is here,” she said.
For Ms. Patino, her favorite part is the pictures that she puts on her Christmas tree each year.
“I have most of the pictures that we have been taking at the firehouse with all the Christmas ornaments,” she said.
As the town’s No. 1 cheerleader, Hightstown Mayor Larry Quattrone said he was pleased with this year’s parade.
“I would like to thank all who worker so hard to make it a hit,” said Mayor Quattrone. “ I have seen it for many years, Hightstown is small town USA. Just seeing all those kids’ eyes was the best. Thank you Hightstown, you’re the best.”