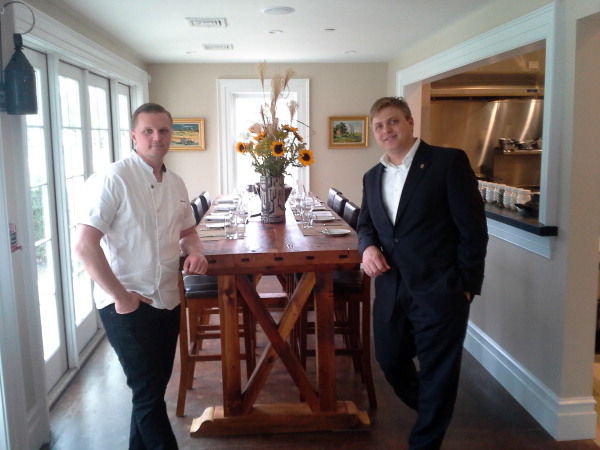 By Frank Mustac, Special Writer
HOPEWELL TOWNSHIP — A historic farmhouse built in the 1800s has taken on a new role for the 21st century as the Brick Farm Tavern, providing an elegant farm-to-table dining experience with a full bar.
Located at 130 Hopewell-Rocky Hill Road on the grounds of Double Brook Farm, just east of Hopewell Borough, the Brick Farm Tavern officially opened in late November following a three-year renovation project.
Seating 123 guests in total, the tavern interior is warm, comfortable and inviting, thanks in large part to a thoughtful design that makes use of repurposed timber and other well-seasoned wood painstakingly recovered from the original farmhouse.
Property owners Jon and Robin McConaughy have partnered on the tavern venture with Executive Chef Greg Vassos and General Manager Mike Lykens, a trained Sommelier and seasoned pub and restaurant manager.
Before joining Brick Farm Tavern from Broadmoor, Chef Vassos was Chef de Cuisine in such institutions as The Brasserie by Dean Max on Grand Cayman Island and L’Escalier at the Breakers in Palm Beach, Fla.
“The food is definitely contemporary American,” Chef Vassos said about the cuisine at Brick Farm Tavern during an interview at the restaurant a day prior to the Nov. 19 opening. “We offer two different experiences here. Primarily we have the dining room where we feature a four-course menu at à la carte prices. Then we have two different chef’s tasting menus. That menu is based on what the farm provides — Double Brook Farm primarily – protein, vegetables and dairy.”
In the bar, Brick Farm Tavern offers more casual fare – like burgers and charcuterie (delicatessen-style meats and meat dishes). While Double Brook Farm is the primary source of seasonal ingredients, the tavern also buys from other local growers and artisanal purveyors.
“We want to showcase those ingredients and give respect to the hard work the farmers have put in,” Chef Vassos said. “But definitely, the food is modern and playful without being intimidating.”
One of the chef’s signature dishes is “Egg in a Nest,” a table-side experience combining a fresh Double Brook egg, toasted polenta, larded local mushrooms and peatendrils in a baked “nest” of hay from the farm.
Another dish, the Crisp Pork Belly, enlists Double Brook pork, local apples, honey from the farm and a house-made butter ‘noisette.’
“The cocktail program will mirror the food – craft cocktails with seasonal and fresh local ingredients,” Mr. Lykens said. “We do have that same focus that chef has in the kitchen.”Plans are underway to add local beers and spirits to the tavern’s offerings, he said, but for now, the bar menu contains selections from outside the area, including wines.
“It’s difficult to do a comprehensive beverage program with local only,” Mr. Lykens said. “Even if there are some spirits we use that are made elsewhere, the ingredients going into a cocktail for the most part are going to be local.”
“We source some beautiful local pumpkin, lemon grass and lavender and other really great flavoring agents to cocktails that are very local.”
Chef Vassos summed up the farm-to-table theme at Brick Farm Tavern.
“I think Jon and Robin (McConaughy) had a vision of this place being how people use to eat in Hopewell in the early times using the abundance of this land that’s here. That’s what we’re trying to do,” the chef said. “The food is really all local.”
Brick Farm Tavern hours are Tuesday to Sunday, 5:30-9:30 p.m., with bar hours Tuesday to Sunday from 4:30-10 p.m. Call 609-333-9200 for reservations. Learn more about Brick Farm Tavern at brickfarmtavern.com. 