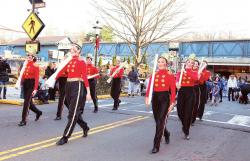 The annual Winter Festival Parade ushers in the holiday season as it marches on Main Street, Metuchen, on Nov. 29. COURTESY OF DAVID GLASOFER How did Metuchen attain the reputation “The Brainy Borough?” That is what the Metuchen Historic Preservation Committee, with the help of historians Linda McTeague, Dennis Bertland and Margaret Newman, unveiled in a booklet titled “Metuchen, The Brainy Borough” that was recently released.

“This year is the 100th anniversary of the battle for the Brainy Borough title between Glen Ridge (in Essex County) and Metuchen,” said Councilman Jay Muldoon, liaison to the Historic Preservation Committee.

The battle was played out in local newspapers, “The Metuchen Recorder,” and Bloomfield’s “Independent Press” in 1914 and 1915. According to records in the Metuchen-Edison Historical Society’s archives, the editors of the paper met on a commuter train, and after a discussion, the battle was born. 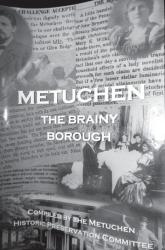 On March 3, 1914, the “Independent Press” of Bloomfield issued its written challenge to Metuchen to compete against Glen Ridge in order to prove which borough had the most “mental celebrities” and could thus call itself “The Brainy Borough.”

As printed in the March 20, 1914 edition of the “Independent Press,” Metuchen accepted the challenge to “engage in combat journalistique.”

Every week, a prominent figure of each town was featured in the newspaper. The witty bantering back and forth continued for the next year.

“Ultimately, Metuchen was the winner … the people were pretty amazing,” said Muldoon.

On August 13, 1915, as printed in the “Independent Press”, the “Metuchen Recorder” deemed the time ripe and demanded to announce Metuchen “rightfully and proven the bearer of the title, ‘The brainiest borough,’ by virtue of the fact that, while still bountifully supplied with ammunition for continuing this struggle and we stand ready to attack, no vestige of life, nor sign of hostility is further heard from opposing forces.”

Nancy Zerbe, a member of the Historic Preservation Committee, said members of the committee had been aware of the battle; however, did not have extant copies of the “Metuchen Recorder” newspaper.

“It was the missing piece,” she said. “The findings of copies of the [articles from the Metuchen Recorder that carried each town’s submissions during the battle] were a historical win and filled in information about the battle. It was fun to read the flowery writing of newspapers 100 years ago.”

The historian Bertland, through research, found that much of Metuchen’s reporting on the subject was also reprinted in Bloomfield’s “Independent Press”, available at the Bloomfield Public Library on microfilm.

Muldoon and Zerbe said they were impressed by the people featured in the battle, who came from diverse literary, artistic, and musical backgrounds.

The Metuchen Historic Preservation Committee was formed in January 2008 to advise the mayor and council on steps to strengthen Metuchen’s commitment to historic preservation.

The committee’s goals are to develop public education on the benefits of historic preservation, honor Metuchen’s historic resources by increasing the number of structures in town listed on the New Jersey and National Registers of Historic Places, and explore the development of a Metuchen Historic Preservation Ordinance to formally recognize and protect the town’s distinctive historic and architectural character.

Zerbe said over the years, the committee has received small grants from the Middlesex County Cultural & Heritage Commission with the borough matching the funds.

For the “Metuchen, The Brainy Borough” booklet, the committee received grant funds totaling slightly over $3,000, which went towards printing costs so the committee could provide free copies to residents and the public.

The booklet was a byproduct of the committee’s exploration of the development of a Metuchen Historic Preservation Ordinance to formally recognize and protect the town’s distinctive historic and architectural character.

“We currently have a draft for the distinction; however, we felt the information about the battle was too good to not put out there to the public,” said Zerbe.

Copies of the booklet are available at the Metuchen Public Library and a link to the booklet is on the borough’s website at metuchennj.org.