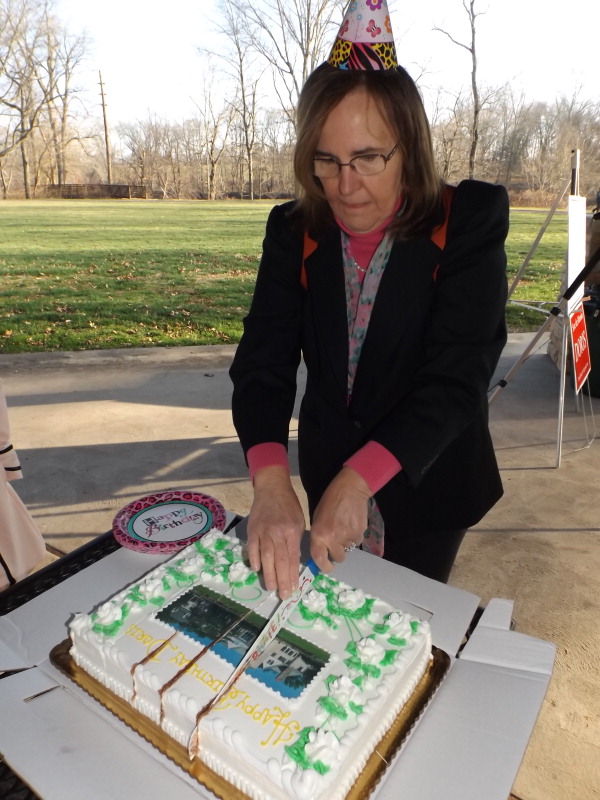 By Gene Robbins, Managing Editor
There was a sheet cake and cone-shaped party hats, but Sunday’s 103rd “birthday party” for Doris Duke grew a bit somber at times.
Objectors to the demolition of the residence of the reclusive philanthropist on the 2,500-acre estate in northern Hillsborough held the symbolic party in the Duke Island County Park named for the family. The site lies across the Raritan River from the sprawling and deteriorated residence that is nearing ever closer to the wrecker’s ball.
The “birthday party” (Ms. Duke was born on Nov. 22, 1912) featured a chocolate pudding-filled sheet cake, and an awards ceremony presenting a notorious award to the two foundations set up after her death to oversee the estate.
The event was set up to rally support as the fight begins to wend its way through the courts. The opponents, organized in a group called DORIS, an acronym for Demolition of the Residence is Senseless, were denied a request Friday for an injunction to stop removal of interior embellishments, like windows, mantelpieces, plumbing and doors, at the home.
Later that day, the group filed a full court appeal seeking a reconsideration of the approval to allow a demolition.
For the last four months, Duke Farms’ proposed demolition of the house has ignited a local — and even international — outcry. The 65,000-square-foot house, whose core dates back to the 1860s, was the home of tobacco empire builder James B. Duke and his daughter, Doris, who used her life of privilege to become a preservationist and philanthropist.
Duke Farms, which has converted the more than 2,000 acres into an environmental preserve open free to the public, said it needed to remove the house to open that part of the site for public use and to be able to shift money to restore the Coach Barn and other properties on the estate.
The Duke Farms Foundation received permission Oct. 29 from the township Historic Preservation Commission’s to process a demolition permit.
Elisabeth McConville, who says she was knew Ms. Duke’s wishes from her work as a personal confidant and a 20-year employee, said Ms. Duke was very lonely, with no siblings, children, relatives and friends, and two ex-husbands “both of whom betrayed her in one way of another.”
“What she had was money, and she was very generous,” Ms. McConville said. Ms. Duke gave away $400 million to charity, much done anonymously without her name being attached to it. McConville said she knew because she opened the mail and signed the checks.
She said Ms. Duke had three passions: preservation, her home and her dogs, “who could do no wrong,” she said.
She said Ms. Duke was an ardent conservationist of historical buildings and personally purchased more than 79 Federalist period houses in Newport, Rhode Island. She said she oversaw an effort in 1987 to protect her residence in Hillsborough preserved when she sought (but didn’t complete) a nomination to put the property on the National Register of Historical Places.
Ms. McConville grew more somber, saying DORIS “may lose, and probably will lose,” but “we put up the good fight.”
“This (demolition) is not what she would have wanted,” Ms McConville said.
David Brook, a Hillsborough resident acting as the group’s attorney, urged people to keep the faith.
“I don’t think we have lost, yet,” he said, declaring that DORIS was in the fight for the long haul. He urged attendees to rally their friends and give to cover legal expenses like transcripts and court filing fees. He said the group had raised $2,400 from donations and an Internet funding site, but asked the group if they knew any famous people who might take on a cause celebre.
Kim Hansen, a member of DORIS and a lifelong resident on Neshanic Station, said she recalled driving through the property as a youngster with her nose pressed to the car window, hoping to get a glimpse of Ms. Duke — or even the camels she had on the estate.
Ms. Hansen presented the award certificate, entitled “The 2015 Doris Duke Historical Demolition Award” to be satirically modeled after the Doris Duke Preservation Awards.
“But our award will recognize those who are not doing good,” she said. She said the two foundations were receiving the award “for taking the ball and running in the wrong direction.”
“It’s the most despicable award possible,” she said.
DORIS has an email of DorisDuke1932@gmail.com and funding appeal at https://www.gofundme.com/dorisdukemansion or “DORIS” at 125 East Cliff St., Somerville, N.J. 08876. 