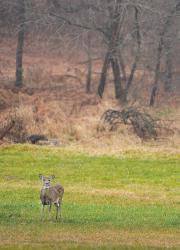 STAFF PHOTOGRAPHER ERIC SUCAR Deer management is a crucial process in controlling the population of the wild mammal in New Jersey, a number that could well exceed 200,000 this year, according to state officials

Roberts said the State Farm Insurance Agency releases an annual report on deer collisions. New Jersey drivers have a 1 in 234 chance of hitting a deer and ranks 34th across the country in collisions with deer, according the report.